Researchers with the UCI Susan Samueli Center for Integrative Medicine have found that regular electroacupunture treatment can lower hypertension by increasing the release of a kind of opioid in the brainstem region that controls blood pressure.

In tests on rats, UCI cardiology researcher Zhi-Ling Guo and colleagues noted that reduced blood pressure lasted for at least three days after electroacupuncture by increasing the gene expression of enkephalins, which one of the three major opioid peptides produced by the body.

Their study, which appears in the Nature’s Scientific Reports, presents the first evidence of the molecular activity behind electroacupunture’s hypertension-lowering benefits.

Last year, the UCI team reported patients treated with acupuncture at certain wrist locations experienced drops in their blood pressure. The present study shows that repetitive electroacupuncture evokes a long-lasting action in lowering blood pressure in hypertension, suggesting that this therapy may be suitable for treating clinical hypertension. 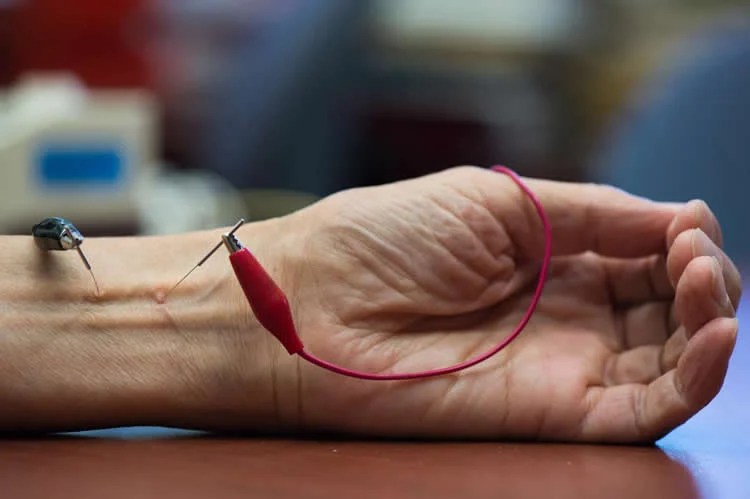 Hypertension affects about one third of the adult population of the world, and its consequences, such as stroke and heart attacks, are enormous public health problems, and the potential advantages of acupuncture over conventional medical therapy include few, if any, of side effects.

Funding: Funding provided by the NIH.

Acupuncture lowers blood pressure (BP) in hypertension, but mechanisms underlying its action are unclear. To simulate clinical studies, we performed electroacupuncture (EA) in unanesthetized rats with cold-induced hypertension (CIH) induced by six weeks of cold exposure (6 °C). EA (0.1 – 0.4 mA, 2 Hz) was applied at ST36-37 acupoints overlying the deep peroneal nerve for 30 min twice weekly for five weeks while sham-EA was conducted with the same procedures as EA except for no electrical stimulation. Elevated BP was reduced after six sessions of EA treatment and remained low 72 hrs after EA in 18 CIH rats, but not in sham-EA (n = 12) and untreated (n = 6) CIH ones. The mRNA level of preproenkephalin in the rostral ventrolateral medulla (rVLM) 72 hr after EA was increased (n = 9), compared to the sham-EA (n = 6), untreated CIH rats (n = 6) and normotensive control animals (n = 6). Microinjection of ICI 174,864, a δ-opioid receptor antagonist, into the rVLM of EA-treated CIH rats partially reversed EA’s effect on elevated BP (n = 4). Stimulation of rVLM of CIH rats treated with sham-EA using a δ-opioid agonist, DADLE, decreased BP (n = 6). These data suggest that increased enkephalin in the rVLM induced by repetitive EA contributes to BP lowering action of EA.