Summary: A new study reports amyloid beta proteins are able to accumulate in the retina and damage it, which may result in age related macular degeneration in older people.

Research from the University of Southampton gives new insight into possible causes of Age-related Macular Degeneration (AMD), a leading cause of vision loss among people aged 50 and older.

The study, published in the journal Experimental Eye Research, discovered that a group of proteins, which are linked to Alzheimer’s disease, are able to accumulate in the retina and damage it.

The researchers hope that the discovery could lead to better treatments for patients.

AMD is a progressive disease that causes the death of the retinal photoreceptors, the light-sensitive cells at the back of the eye. The most severe damage occurs in the macula, a small area of the retina that is needed for sharp, central vision necessary for reading, driving and other daily tasks.

There are two different types of AMD — ‘wet’ and ‘dry’. In wet AMD, the growth of leaky blood vessels which damage the retina can be stopped. However, this does not work for everyone, and is a way to manage rather than cure wet AMD. By contrast, dry AMD has no approved treatment as yet.

Dr Arjuna Ratnayaka, a Lecturer in Vision Sciences at the University of Southampton, who led the study, said: “We know that AMD is caused by a combination of genetic, environmental and lifestyle risk factors, but this novel discovery could open up new possibilities to understand how the ageing retina becomes damaged. Such advances are important if we are to develop better AMD treatments in the future.

“AMD currently affects more than 600,000 people in the UK and 50 million individuals worldwide. This figure is expected rise significantly as our society grows older. We urgently need new treatments to stop people spending their twilight years in blindness.”

The study, which used both cell cultures and mouse models, analysed how quickly Amyloid beta proteins, which are thought to be a likely cause of Alzheimer’s disease, entered the retina and how they damaged it. 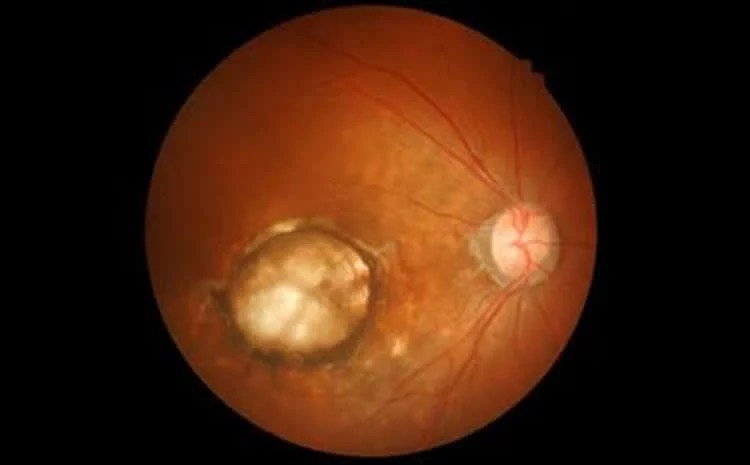 The team found that the Amyloid beta proteins entered the cells of the retina within 24 hours of exposure and then began to break the cell’s scaffold structure.

Dr Ratnayaka added: “The speed in which these proteins entered the retinal cells was unexpected. These findings have given some insights into how a normal healthy retina can switch to a diseased AMD retina. We hope that this could lead to designing better treatments for patients in the future.”

The research team’s next step will be to evaluate how the Amyloid beta proteins get into retinal cells and study more closely how damage occurs, with a view of establishing preventative measures or treatment options.

Funding: The study was funded by the National Centre for the Replacement, Refinement and Reduction of Animals in Research (NC3R), the Macular Society UK, Fight for Sight, the Gift of Sight Appeal and the Hampshire and Isle of Wight Community Foundation.

University of Southampton. “Alzheimer’s Proteins Could Be At Fault For Leading Cause of Vision Loss in Older People.” NeuroscienceNews. NeuroscienceNews, 21 November 2016.
<http://neurosciencenews.com/amd-vision-alzheimers-5560/&gt;.

Age-related Macular Degeneration (AMD) is a common, irreversible blinding condition that leads to the loss of central vision. AMD has a complex aetiology with both genetic as well as environmental risks factors, and share many similarities with Alzheimer’s disease. Recent findings have contributed significantly to unravelling its genetic architecture that is yet to be matched by molecular insights. Studies are made more challenging by observations that aged and AMD retinas accumulate the highly pathogenic Alzheimer’s-related Amyloid beta (Aβ) group of peptides, for which there appears to be no clear genetic basis. Analyses of human donor and animal eyes have identified retinal Aβ aggregates in retinal ganglion cells (RGC), the inner nuclear layer, photoreceptors as well as the retinal pigment epithelium. Aβ is also a major drusen constituent; found correlated with elevated drusen-load and age, with a propensity to aggregate in retinas of advanced AMD. Despite this evidence, how such a potent driver of neurodegeneration might impair the neuroretina remains incompletely understood, and studies into this important aspect of retinopathy remains limited. In order to address this we exploited R28 rat retinal cells which due to its heterogeneous nature, offers diverse neuroretinal cell-types in which to study the molecular pathology of Aβ. R28 cells are also unaffected by problems associated with the commonly used RGC-5 immortalised cell-line, thus providing a well-established model in which to study dynamic Aβ effects at single-cell resolution. Our findings show that R28 cells express key neuronal markers calbindin, protein kinase C and the microtubule associated protein-2 (MAP-2) by confocal immunofluorescence which has not been shown before, but also calretinin which has not been reported previously. For the first time, we reveal that retinal neurons rapidly internalised Aβ1-42, the most cytotoxic and aggregate-prone amongst the Aβ family.

Furthermore, exposure to physiological amounts of Aβ1-42 for 24 h correlated with impairment to neuronal MAP-2, a cytoskeletal protein which regulates microtubule dynamics in axons and dendrites. Disruption to MAP-2 was transient, and had recovered by 48 h, although internalised Aβ persisted as discrete puncta for as long as 72 h. To assess whether Aβ could realistically localise to living retinas to mediate such effects, we subretinally injected nanomolar levels of oligomeric Aβ1-42 into wildtype mice. Confocal microscopy revealed the presence of focal Aβ deposits in RGC, the inner nuclear and the outer plexiform layers 8 days later, recapitulating naturally-occurring patterns of Aβ aggregation in aged retinas. Our novel findings describe how retinal neurons internalise Aβ to transiently impair MAP-2 in a hitherto unreported manner. MAP-2 dysfunction is reported in AMD retinas, and is thought to be involved in remodelling and plasticity of post-mitotic neurons. Our insights suggest a molecular pathway by which this could occur in the senescent eye leading to complex diseases such as AMD.