Beth Israel Deaconess Medical Center (BIDMC) researchers have identified previously unknown neural circuitry that plays a role in promoting satiety, the feeling of having had enough to eat. The discovery revises the current models for homeostatic control — the mechanisms by which the brain maintains the body’s status quo — of feeding behavior. Published online today in Nature Neuroscience, the findings offer new insight into the regulation of hunger and satiety and could help researchers find solutions to the ongoing obesity epidemic.

However, in recent years, new technology has allowed scientists to selectively manipulate neurons in living animals, demonstrating specific neurons’ direct effect on behavior. About five years ago, this type of research revealed that POMC neurons act over the course of many hours — not minutes like their AgRP counterparts.

“The lack of a rapid effect strongly suggested that the POMC neurons, by themselves, are not the full counterpart to the AgRP neurons,” said lead author Henning Fenselau, PhD, a postdoctoral fellow in Lowell’s laboratory at BIDMC. “We hypothesized that an important but unknown neural component of the satiety system was missing from the current models.”

What’s more, because the team was looking for neurons that would suppress eating quickly, they narrowed their search for ones that release the fast-acting, excitatory neurotransmitter called glutamate. In the current paper, Lowell and colleagues investigated a third subset of neurons, Vglut2, the function of which was previously unknown.

In a series of experiments, Lowell and colleagues used optogenetics (the use of light to activate genetically-modified neurons) and chemogenetics (the use of molecules to activate targeted neurons) to manipulate specific neurons to determine their roles in feeding behavior. First, the team demonstrated that, unlike POMC neurons, Vglut2 neurons could in fact rapidly suppress feeding behavior in mice. When the researchers chemically stimulated the neurons in question, it markedly decreased eating. When they inhibited the Vglut2 neurons, eating increased.

They also found that all three types of neurons — the hunger promoting AgRP neurons and the two satiety promoting neurons, Vglut2 neurons and POMC neurons — interact in the same circuit. All three converge downstream in a site in the hypothalamus known to suppress hunger, the subject of previous research by Lowell and colleagues. AgRP neurons inhibit activity in this downstream site, causing hunger, while the rapidly-acting Vglut2 neurons excite it, suppressing hunger. The third member of this circuit, POMC neurons, indirectly decrease hunger by releasing a hormone that bolsters Vglut2 neurons’ ability to suppress hunger.

“We think this is very important because it may be one explanation why individuals lacking POMC genes become extremely obese, even if those neurons by themselves do not directly promote satiety,” said Fenselau. “Without POMC, the Vglut2 neurons are ineffective in stimulating the downstream hypothalamic site. You need both POMC neurons and Vglut2 neurons for the satiety mechanism to work properly.” 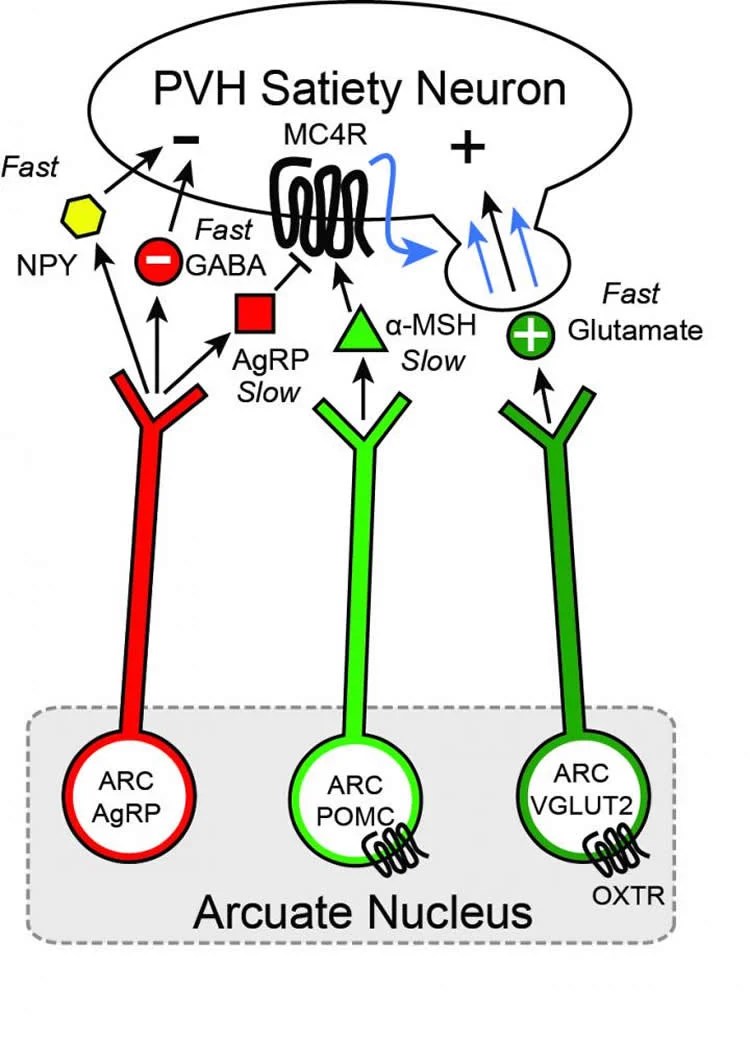 Finally, the team sequenced the genes expressed by this subset of neurons and found they possess receptors for the hormone oxytocin. Known to play a role in social bonding, oxytocin is linked to feelings of contentment and is already being investigated for its potential as a satiety-inducing weight loss medication. “Our findings could definitely explain why oxytocin is effective in satiety,” said Fenselau.

To follow up, the scientists will further investigate the interactions among the three types of neurons and the role they play in obesity.

Arcuate nucleus (ARC) neurons sense the fed or fasted state and regulate hunger. Agouti-related protein (AgRP) neurons in the ARC (ARCAgRP neurons) are stimulated by fasting and, once activated, they rapidly (within minutes) drive hunger. Pro-opiomelanocortin (ARCPOMC) neurons are viewed as the counterpoint to ARCAgRP neurons. They are regulated in an opposite fashion and decrease hunger. However, unlike ARCAgRP neurons, ARCPOMC neurons are extremely slow in affecting hunger (many hours). Thus, a temporally analogous, rapid ARC satiety pathway does not exist or is presently unidentified. Here we show that glutamate-releasing ARC neurons expressing oxytocin receptor, unlike ARCPOMC neurons, rapidly cause satiety when chemo- or optogenetically manipulated. These glutamatergic ARC projections synaptically converge with GABAergic ARCAgRP projections on melanocortin-4 receptor (MC4R)-expressing satiety neurons in the paraventricular hypothalamus (PVHMC4R neurons). Transmission across the ARCGlutamatergicright arrowPVHMC4R synapse is potentiated by the ARCPOMC neuron-derived MC4R agonist, α-melanocyte stimulating hormone (α-MSH). This excitatory ARCright arrowPVH satiety circuit, and its modulation by α-MSH, provides insight into regulation of hunger and satiety.