Taking music lessons increases brain fiber connections in children and may be useful in treating autism and Attention Deficit Hyperactivity Disorder (ADHD), according to a study being presented next week at the annual meeting of the Radiological Society of North America (RSNA).

“It’s been known that musical instruction benefits children with these disorders,” said Pilar Dies-Suarez, M.D., chief radiologist at the Hospital Infantil de México Federico Gómez in Mexico City, “but this study has given us a better understanding of exactly how the brain changes and where these new fiber connections are occurring.”

The researchers studied 23 healthy children between the ages of five and six years old. All of the children were right handed and had no history of sensory, perception or neurological disorders. None of the children had been trained in any artistic discipline in the past.

The study participants underwent pre- and post-musical-training evaluation with diffusion tensor imaging (DTI) of the brain. DTI is an advanced MRI technique, which identifies microstructural changes in the brain’s white matter.

“Experiencing music at an early age can contribute to better brain development, optimizing the creation and establishment of neural networks, and stimulating the existing brain tracts,” Dr. Dies-Suarez said.

Over the course of life, the maturation of brain tracts and connections between motor, auditory and other areas allow the development of numerous cognitive abilities, including musical skills. Previous studies have linked autism spectrum and ADHD with decreases in volume, fiber connections and FA in the minor and lower forceps, tracts located in the frontal cortex of the brain. This suggests that low connectivity in the frontal cortex, an area of the brain involved in complex cognitive processes, is a biomarker of these disorders. 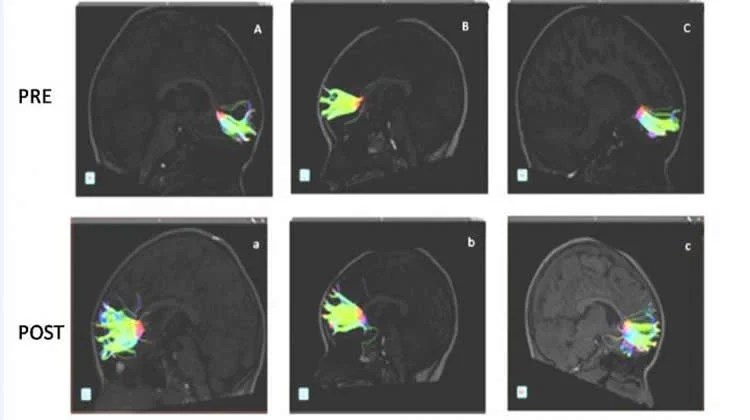 After the children in the study completed nine months of musical instruction using Boomwhackers–percussion tubes cut to the exact length to create pitches in a diatonic scale, DTI results showed an increase in FA and axon fiber length in different areas of the brain, most notably in the minor forceps.

“When a child receives musical instruction, their brains are asked to complete certain tasks,” Dr. Dies-Suarez said. “These tasks involve hearing, motor, cognition, emotion and social skills, which seem to activate these different brain areas. These results may have occurred because of the need to create more connections between the two hemispheres of the brain.”

The researchers believe that the results of this study could aid in creating targeted strategies for intervention in treating disorders like autism and ADHD.

ABOUT THIS NEUROSCIENCE AND MUSIC RESEARCH ARTICLE

Source: Linda Brooks – RSNA
Image Source: NeuroscienceNews.com image is credited to RSNA.
Original Research: The study will be presented at RSNA 2016 – 102nd Scientific Assembly and Annual Meeting, in Chicago between November 27 and December 2, 2016.