Summary: Researchers have identified a naturally occurring molecule that has the potential for preserving sites of communication between nerves and muscles in ALS.

Researchers at the Virginia Tech Carilion Research Institute have identified a naturally occurring molecule that has the potential for preserving sites of communication between nerves and muscles in amyotrophic lateral sclerosis (ALS) and over the course of aging — as well as a molecule that interferes with this helpful process.

The discovery in mice has implications for patients with ALS, also known as Lou Gehrig’s disease.

Publishing this week as an early release research article in The Journal of Neuroscience, the research team, led by Gregorio Valdez, an assistant professor at the Virginia Tech Carilion Research Institute and in the Department of Biological Sciences at Virginia Tech, describes a growth factor called FGFBP1, which is secreted by muscle fibers and maintains neuromuscular junctions — a critical type of synapse that allows the spinal cord to communicate with muscles, sending signals from the central nervous system to create movements.

ALS strikes approximately 6,000 people in the U.S. each year, according to the ALS Association.

In mouse models of ALS, a growth factor associated with the immune system, called TGF-beta, emerges and prevents muscles from secreting factors needed to maintain their connections with neurons.

“TGF-beta is upregulated in ALS and in turn blocks expression of FGFBP1, which is released by muscle fibers to preserve the integrity of the neuromuscular junction,” Valdez said. “The body is trying to help itself by generating more TGF-beta. Unfortunately, TGF-beta accumulates at the synapse where it blocks expression of FGFBP1, accelerating degeneration of the neuromuscular junction.”

FGFBP1 also gradually decreases during aging, but more precipitously in ALS, because of TGF-beta accumulates at the synapse, according to Thomas Taetzsch, a postdoctoral fellow in the Valdez lab and a co-first author of the study.

Milagros Tenga, a postdoctoral fellow in the Valdez lab also contributed to this discovery and is also a co-first author in the paper. 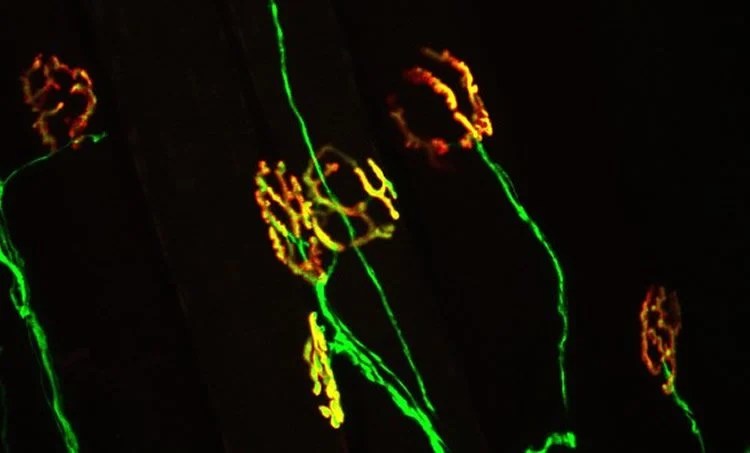 In people, ALS progresses rapidly, attacking nerve cells that control voluntary muscles. Eventually, all muscles under voluntary control are affected, and individuals lose their strength and the ability to move their arms, legs, and body, according to the National Institute of Neurological Disorders and Stroke.

Most people with ALS die from respiratory failure, usually within three to five years from the onset of symptoms.

“Our findings suggest that targeting these molecules may allow these important synapses to stay in place, and slow the progression of ALS,” Valdez said.

The identity of muscle secreted factors critical for the development and maintenance of neuromuscular junctions (NMJ) remains largely unknown. Here, we show that muscle fibers secrete and concentrate the fibroblast growth factor binding protein 1 (FGFBP1) at NMJs. While FGFBP1 expression increases during development, its expression decreases prior to NMJ degeneration during aging and in SOD1G93A mice, a mouse model for amyotrophic lateral sclerosis (ALS). Based on these findings, we examined the impact of deleting FGFBP1 on NMJs. In the absence of FGFBP1, NMJs exhibit structural abnormalities in developing and middle age mice. Deletion of FGFBP1 from SOD1G93A mice also accelerates NMJ degeneration and death. Based on these findings, we sought to identify the mechanism responsible for decreased FGFBP1 in stressed skeletal muscles. We show that FGFBP1 expression is inhibited by increased accumulation of the transforming growth factor- β1 (TGF-β1) in skeletal muscles and at their NMJs. These findings suggest that targeting the FGFBP1 and TGF-β1 signaling axis holds promise for slowing age- and disease-related degeneration of NMJs.

Significance Statement: The neuromuscular junction (NMJ) is critical for all voluntary movement. Its malformation during development and degeneration in adulthood impairs motor function. Thus, it is important to identify factors that function to maintain the structural integrity of NMJs. We show that muscle fibers secrete and concentrate the fibroblast growth factor binding protein 1 (FGFBP1) at NMJs. However, FGFBP1 expression decreases in skeletal muscles during aging and prior to NMJ degeneration in SOD1G93A mice, a mouse model for ALS. We show that TGF-β1 is responsible for the decreased levels of FGFBP1. Importantly, we demonstrate critical roles for FGFBP1 at NMJs in developing, aging and SOD1G93A mice.