Summary: Researchers report AP2gamma, a protein associated with the growth of breast cancer tumors, plays a vital role in the regulation of hippocampal neurogenesis.

Protein originally known to promote the growth of breast cancer cells has been found to be essential for the production of new neurons in the adult brain.

Contrary to what was previously assumed, the notion that the adult brain has the ability to generate new neuronal cells throughout life is now well established. This process, known as neurogenesis, participates in different brain functions, such as in the production and storage of new memories, or in the very definition of the emotions that define us.

This capacity of the adult brain to generate new neurons has been widely studied, in the perspective of its future application to regenerative therapies in the context of neurological and psychiatric diseases, such as Parkinson’s and Alzheimer’s Disease or Depression.

A team of researchers from the Life and Health Sciences Research Institute (ICVS) at the University of Minho (Braga, Portugal), leaded by Dr. Luisa Pinto and Professor Nuno Sousa, have identified a novel protein – AP2gamma – with an important role in the regulation of the production of new neurons in the adult brain.

“This protein was initially described to be altered in the pathogenesis of breast cancer by contributing to the proliferation of cancer cells. However, when we identified the presence of AP2gamma in the adult brain, we sought to understand its function in that context. For that, we genetically manipulated the expression of AP2gamma in mice and studied the molecular and behavioral outcomes of altering the levels of this protein” explained Dr. Pinto.

Results of the study shows that AP2gamma is essential for the generation of new neurons in the adult hippocampus and its absence compromises the performance in specific behavioral domains. 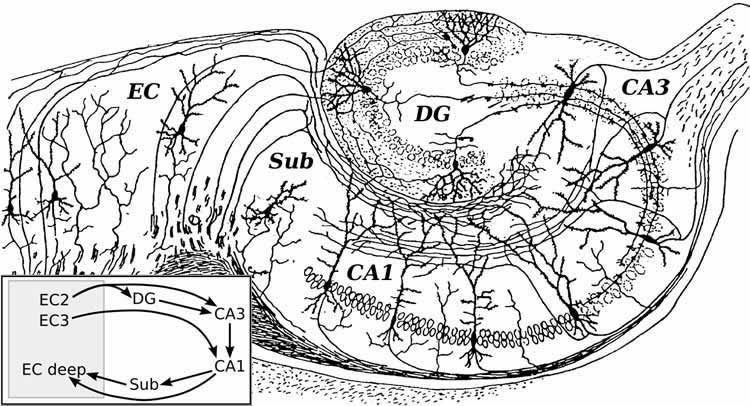 “Interestingly, the impairment of hippocampal neurogenesis, driven by the deletion of AP2gamma, leads to a dysfunctional communication between the hippocampus and the prefrontal cortex. In turn, this impaired communication between different regions of the brain seems to contribute to a deficient performance in cognitive tasks, such as in the consolidation of new memories or in spatial navigation” highlighted the co-authors of the study, Dr. Mateus-Pinheiro and Dr. Alves.

These observations contribute to a better understanding of the process of generation of new neurons in the adult brain and its impact in behavioral control. Next, Dr. Pinto’s team aims to understand the involvement of AP2gamma in stress-related disorders, such as Depression, where the production of new neurons has been shown to become compromised.

NeuroscienceNews.com would like to thank Nuno Dinis Alves for submitting this research article to us for inclusion.

Hippocampal neurogenesis has been proposed to participate in a myriad of behavioral responses, both in basal states and in the context of neuropsychiatric disorders. Here, we identify activating protein 2γ (AP2γ, also known as Tcfap2c), originally described to regulate the generation of neurons in the developing cortex, as a modulator of adult hippocampal glutamatergic neurogenesis in mice. Specifically, AP2γ is present in a sub-population of hippocampal transient amplifying progenitors. There, it is found to act as a positive regulator of the cell fate determinants Tbr2 and NeuroD, promoting proliferation and differentiation of new glutamatergic granular neurons. Conditional ablation of AP2γ in the adult brain significantly reduced hippocampal neurogenesis and disrupted neural coherence between the ventral hippocampus and the medial prefrontal cortex. Furthermore, it resulted in the precipitation of multimodal cognitive deficits. This indicates that the sub-population of AP2γ-positive hippocampal progenitors may constitute an important cellular substrate for hippocampal-dependent cognitive functions. Concurrently, AP2γ deletion produced significant impairments in contextual memory and reversal learning. More so, in a water maze reference memory task a delay in the transition to cognitive strategies relying on hippocampal function integrity was observed. Interestingly, anxiety- and depressive-like behaviors were not significantly affected. Altogether, findings open new perspectives in understanding the role of specific sub-populations of newborn neurons in the (patho)physiology of neuropsychiatric disorders affecting hippocampal neuroplasticity and cognitive function in the adult brain.