“Organisms pay attention to what other members of their species are doing,” says Cori Bargmann, a neuroscientist at Rockefeller University. “It’s a very robust phenomenon that you see from humans on Twitter to bacteria, and everything in between.”

That’s why Bargmann, Torsten N. Wiesel Professor and head of Rockefeller University’s Lulu and Anthony Wang Laboratory of Neural Circuits and Behavior, and her coworkers set out to understand how animals are incorporating social information into their behavior. Their most recent study pinpoints genome variations that allow animals to use information about their competitors to modify their innate strategies for searching for food. These findings provide concrete evidence for game theory, which suggests, among other things, that population density changes how individuals act.

In the study, Bargmann and her collaborators designed a series of experiments using Caenorhabditis elegans, a tiny roundworm with easily detectable habits. The worms interact with one another by secreting and sensing pheromones. “The advantage to using a simple organism like C. elegans is that you can look at questions in great detail,” Bargmann says. “But some principles that emerge may apply to all species, including humans.”

An unexpected role for pheromones

In the wild, C. elegans worms in the quest for food alternate between an exploratory behavior called roaming and a less active behavior called dwelling, where the worms essentially “hunker down and eat,” Bargmann says. By exploring the differences in the worms’ behavior in various settings, the researchers found a new role for pheromones called ascarosides. These signaling molecules control behaviors like male sexual activity. (C. elegans are self-fertilizing hermaphrodites, but some do have sex–though worms tend to get lucky only once every 100 generations.) But Bargmann found the pheromone also seemed to help the animals modify their behaviors based on how many worms were nearby.

With further experimental analysis, the scientists identified two distinct genetic variants that resulted in these sensitivity differences, suggesting that in crowded places, wild C. elegans populations with a specific genetic variation adopt different behaviors than those who don’t. The variants that are insensitive make less of a key protein that senses ascarosides in their olfactory system than those that are sensitive.

“The big take home,” Bargmann says, “is that one of the ways behavior evolves is through the appearance of genetic changes that affect sensory capabilities. We have every reason to believe that human behaviors have been shaped in a similar way.” The findings also suggest that natural trait variations are the result of both environmental cues and genetic changes. 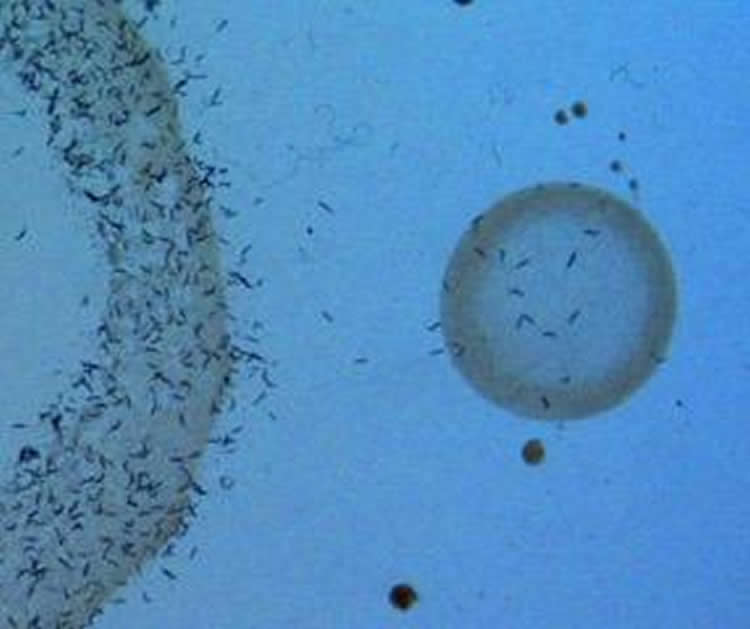 For example, reptiles don’t eat sugar, and have lost their sweet-tasting receptors during the course of evolution. But hummingbirds evolved from reptiles, and they can nevertheless taste sugar–meaning they had to evolve a brand new taste receptor. “This is an evolutionary change in sensitivity, matched to diet,” Bargmann says. “We’re seeing something similar in the C. elegans pheromone sensitivity as well.”

She says, “It may be that behavior is shaped in an ongoing way by variations in the genome that affect our sensitivity to the external world. There’s so much more to learn about genetic variations that may lead to differences in behavior.”

Either way, Bargmann says, “The recognition that population density is a regulator of behavioral strategies may provoke thought about human behavior’s links to its animal origins.”

The optimal foraging strategy in a given environment depends on the number of competing individuals and their behavioural strategies. Little is known about the genes and neural circuits that integrate social information into foraging decisions. Here we show that ascaroside pheromones, small glycolipids that signal population density, suppress exploratory foraging in Caenorhabditis elegans, and that heritable variation in this behaviour generates alternative foraging strategies. We find that natural C. elegans isolates differ in their sensitivity to the potent ascaroside icas#9 (IC-asc-C5). A quantitative trait locus (QTL) regulating icas#9 sensitivity includes srx-43, a G-protein-coupled icas#9 receptor that acts in the ASI class of sensory neurons to suppress exploration. Two ancient haplotypes associated with this QTL confer competitive growth advantages that depend on ascaroside secretion, its detection by srx-43 and the distribution of food. These results suggest that balancing selection at the srx-43 locus generates alternative density-dependent behaviours, fulfilling a prediction of foraging game theory.