People disabled by a stroke demonstrated substantial recovery long after the event when modified adult stem cells were injected into their brains.

Injecting modified, human, adult stem cells directly into the brains of chronic stroke patients proved not only safe but effective in restoring motor function, according to the findings of a small clinical trial led by Stanford University School of Medicine investigators.

The patients, all of whom had suffered their first and only stroke between six months and three years before receiving the injections, remained conscious under light anesthesia throughout the procedure, which involved drilling a small hole through their skulls. The next day they all went home.

Although more than three-quarters of them suffered from transient headaches afterward — probably due to the surgical procedure and the physical constraints employed to ensure its precision — there were no side effects attributable to the stem cells themselves, and no life-threatening adverse effects linked to the procedure used to administer them, according to a paper, published online June 2 in Stroke, that details the trial’s results.

Sonia Olea Coontz, of Long Beach, California, was one of those patients. Now 36, Coontz had a stroke in May 2011. She enrolled in the Stanford trial after finding out about it during an online search.

“My right arm wasn’t working at all,” said Coontz. “It felt like it was almost dead. My right leg worked, but not well.” She walked with a noticeable limp. “I used a wheelchair a lot.”

“After my surgery, they woke up,” she said of her limbs.

The promising results set the stage for an expanded trial of the procedure now getting underway. They also call for new thinking regarding the permanence of brain damage, said Gary Steinberg, MD, PhD, professor and chair of neurosurgery. Steinberg, who has more than 15 years’ worth of experience in work with stem cell therapies for neurological indications, is the paper’s lead and senior author.

“This was just a single trial, and a small one,” cautioned Steinberg, who led the 18-patient trial and conducted 12 of the procedures himself. (The rest were performed at the University of Pittsburgh.) “It was designed primarily to test the procedure’s safety. But patients improved by several standard measures, and their improvement was not only statistically significant, but clinically meaningful. Their ability to move around has recovered visibly. That’s unprecedented. At six months out from a stroke, you don’t expect to see any further recovery.”

Some 800,000 people suffer a stroke each year in the United States alone. About 85 percent of all strokes are ischemic: They occur when a clot forms in a blood vessel supplying blood to part of the brain, with subsequent intensive damage to the affected area. The specific loss of function incurred depends on exactly where within the brain the stroke occurs, and on its magnitude.

Although approved therapies for ischemic stroke exist, to be effective they must be applied within a few hours of the event — a time frame that often is exceeded by the amount of time it takes for a stroke patient to arrive at a treatment center.

Consequently, only a small fraction of patients benefit from treatment during the stroke’s acute phase. The great majority of survivors end up with enduring disabilities. Some lost functionality often returns, but it’s typically limited. And the prevailing consensus among neurologists is that virtually all recovery that’s going to occur comes within the first six months after the stroke.

“There are close to 7 million chronic stroke patients in the United States,” Steinberg said. “If this treatment really works for that huge population, it has great potential.”

For the trial, the investigators screened 379 patients and selected 18, whose average age was 61. For most patients, at least a full year had passed since their stroke — well past the time when further recovery might be hoped for. In each case, the stroke had taken place beneath the brain’s outermost layer, or cortex, and had severely affected motor function.

Into these patients’ brains the neurosurgeons injected so-called SB623 cells —mesenchymal stem cells derived from the bone marrow of two donors and then modified to beneficially alter the cells’ ability to restore neurologic function.

Mesenchymal stem cells are the naturally occurring precursors of muscle, fat, bone and tendon tissues. In preclinical studies, though, they’ve not been found to cause problems by differentiating into unwanted tissues or forming tumors. Easily harvested from bone marrow, they appear to trigger no strong immune reaction in recipients even when they come from an unrelated donor. In fact, they may actively suppress the immune system. For this trial, unlike the great majority of transplantation procedures, the stem cell recipients received no immunosuppressant drugs. 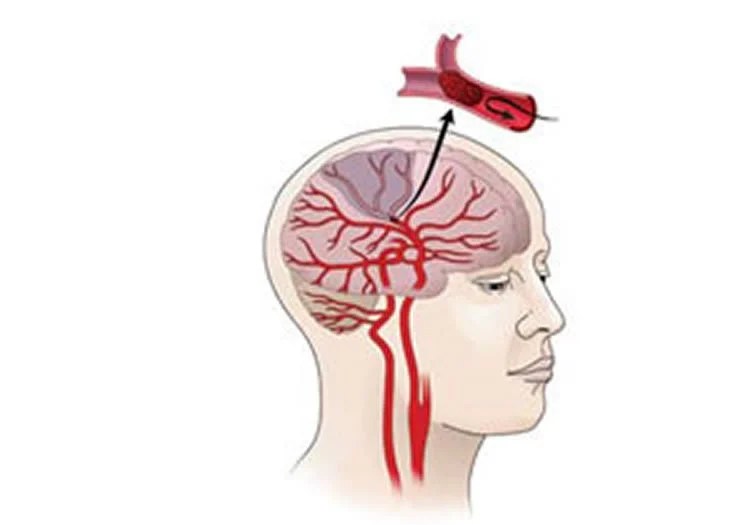 During the procedure, patients’ heads were held in fixed positions while a hole was drilled through their skulls to allow for the injection of SB623 cells, accomplished with a syringe, into a number of spots at the periphery of the stroke-damaged area, which varied from patient to patient.

Afterward, patients were monitored via blood tests, clinical evaluations and brain imaging. Interestingly, the implanted stem cells themselves do not appear to survive very long in the brain. Preclinical studies have shown that these cells begin to disappear about one month after the procedure and are gone by two months. Yet, patients showed significant recovery by a number of measures within a month’s time, and they continued improving for several months afterward, sustaining these improvements at six and 12 months after surgery. Steinberg said it’s likely that factors secreted by the mesenchymal cells during their early postoperative presence near the stroke site stimulates lasting regeneration or reactivation of nearby nervous tissue.

No relevant blood abnormalities were observed. Some patients experienced transient nausea and vomiting, and 78 percent had temporary headaches related to the transplant procedure.

Substantial improvements were seen in patients’ scores on several widely accepted metrics of stroke recovery. Perhaps most notably, there was an overall 11.4-point improvement on the motor-function component of the Fugl-Meyer test, which specifically gauges patients’ movement deficits.

“This wasn’t just, ‘They couldn’t move their thumb, and now they can.’ Patients who were in wheelchairs are walking now,” said Steinberg, who is the Bernard and Ronni Lacroute-William Randolph Hearst Professor in Neurosurgery and Neurosciences.

“We know these cells don’t survive for more than a month or so in the brain,” he added. “Yet we see that patients’ recovery is sustained for greater than one year and, in some cases now, more than two years.”

Importantly, the stroke patients’ postoperative improvement was independent of their age or their condition’s severity at the onset of the trial. “Older people tend not to respond to treatment as well, but here we see 70-year-olds recovering substantially,” Steinberg said. “This could revolutionize our concept of what happens after not only stroke, but traumatic brain injury and even neurodegenerative disorders. The notion was that once the brain is injured, it doesn’t recover — you’re stuck with it. But if we can figure out how to jump-start these damaged brain circuits, we can change the whole effect.

“We thought those brain circuits were dead. And we’ve learned that they’re not.”

The ongoing work is an example of Stanford Medicine’s focus on precision health, the goal of which is to anticipate and prevent disease in the healthy and precisely diagnose and treat disease in the ill.

Other Stanford co-authors of the study are Neil Schwartz, MD, PhD, clinical associate professor of neurology and neurological sciences and of neurosurgery; and former neurosurgery fellow Jeremiah Johnson, MD, now at the University of Texas Health Science Center in San Antonio.

The SB623 cells were provided by SanBio Inc., a biotechnology company based in Mountain View, California. SanBio also funded and helped in designing the trial, but did not participate in its execution.

Background and Purpose Preclinical data suggest that cell-based therapies have the potential to improve stroke outcomes.

Conclusions In this interim report, SB623 cells were safe and associated with improvement in clinical outcome end points at 12 months.