Summary: Degeneration of the basal forebrainappears before cognitive and behavioral symptoms of Alzheimer’s occur, a new study reports.

Alzheimer’s disease is a neurodegenerative disorder for which, despite years of research, there are no effective treatments or cures.

However, recent breakthroughs in molecular genetics have shown that the disease may spread, like an infection, across closely connected areas of the brain. These findings underscore the need for research aimed at tracking its spread to the earliest points of origin in the brain, so therapies that target those areas can be developed.

An international collaboration between Nathan Spreng, Cornell assistant professor of human development and the Rebecca Q. and James C. Morgan Sesquicentennial Faculty Fellow in the College of Human Ecology, and Taylor Schmitz of the University of Cambridge’s Cognitive Brain Sciences Unit, sheds light on the basal forebrain region, where the degeneration of neural tissue caused by Alzheimer’s disease appears even before cognitive and behavioral symptoms of the disease emerge.

Their paper, “Basal forebrain degeneration precedes and predicts the cortical spread of Alzheimer’s pathology,” is published Nov. 4 in Nature Communications. Data used for their work were obtained from the Alzheimer’s Disease Neuroimaging Initiative database.

The basal forebrain contains very large and densely connected neurons that are particularly vulnerable to the disease. Schmitz and Spreng show that, as Alzheimer’s progresses, degeneration of the basal forebrain predicts subsequent degeneration in temporal lobe areas of the brain involved in memory. This pattern is consistent with other research showing that Alzheimer’s indeed spreads across brain regions over time, but the study challenges a widely held belief that the disease originates in the temporal lobe.

“We’re hoping that this work pushes a bit of a reorganization of the field itself, to reappraise where the disease originates,” Spreng said. “That could open up new avenues for intervention; certainly it would for detection.”

Their report is the product of a two-year study of a large sample of age-matched older adults. Within this sample, one group was cognitively normal, according to standard tests, while others were characterized by different levels of cognitive impairment:

Through analysis of high-resolution anatomical magnetic resonance imaging of brain volumes, taken three times over the two-year study period, the researchers were able to determine that individuals with MCI or Alzheimer’s showed greater losses in gray matter volume in both the basal forebrain and temporal lobe, compared with cognitively normal controls. Intriguingly, they showed that over the two-year period, degeneration of neural tissue in the basal forebrain predicted subsequent tissue degeneration in the temporal lobe, but not the other way around.

A sampling of spinal fluid from healthy adults can detect an abnormal level of beta amyloid, indicative of Alzheimer’s, Spreng said. Test results showed that temporal lobes looked the same regardless of amyloid level, but the basal forebrain showed notable degeneration among those seemingly healthy adults with abnormal amyloid levels. 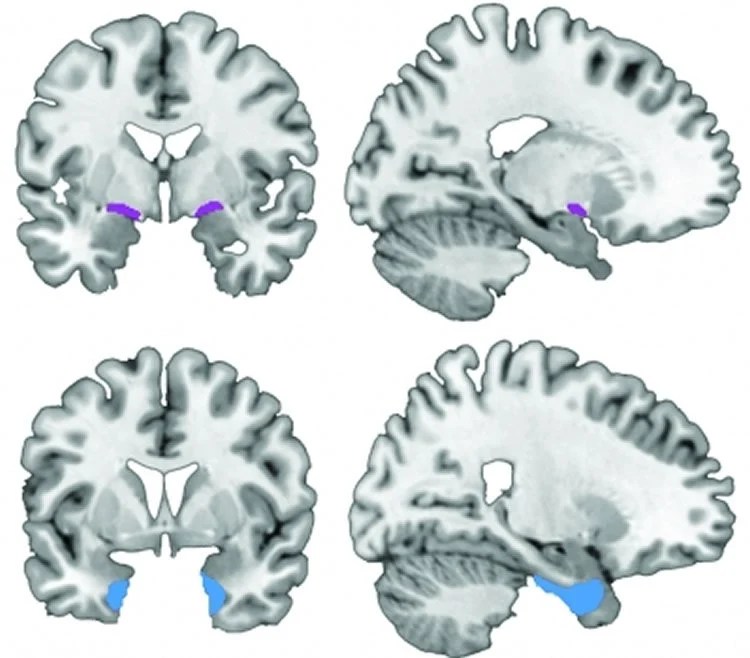 Spreng admits that being able to predict who will get the disease doesn’t mean a lot without a protocol to treat and, ultimately, cure the disease. “And it might induce more anxiety,” he said. But the more knowledge that can be gained now, he said, the better.

“Future molecular genetics work holds strong promise for developing therapeutic strategies to prevent the spread of pathology at stages of Alzheimer’s preceding cognitive decline,” Schmitz said. “Our clarification of an earlier point of Alzheimer’s propagation is therefore of utmost importance for guiding endeavors to combat this devastating disease.”

Funding: This work was funded by grants from the National Institutes of Health and the Alzheimer’s Association.