Loss of smell is known as anosmia. Anosmia can occur on both sides or a single side.

Olfactory problems can be divided into different types based on their malfunction. The olfactory dysfunction can be total (anosmia), incomplete (partial anosmia, hyposmia, or microsmia), distorted (dysosmia), or can be characterized by spontaneous sensations like phantosmia. An inability to recognize odors despite a normally functioning olfactory system is termed olfactory agnosia. Hyperosmia is a rare condition typified by an abnormally heightened sense of smell. Like vision and hearing, the olfactory problems can be bilateral or unilateral meaning if a person has anosmia on the right side of the nose but not the left, it is a unilateral right anosmia. On the other hand, if it is on both sides of the nose it is called bilateral anosmia or total anosmia.[24]

Destruction to olfactory bulb, tract, and primary cortex (brodmann area 34) results in anosmia on the same side as the destruction. Also, irritative lesion of the uncus results in olfactory hallucinations.

Damage to the olfactory system can occur by traumatic brain injury, cancer, infection, inhalation of toxic fumes, or neurodegenerative diseases such as Parkinson’s disease and Alzheimer’s disease. These conditions can cause anosmia. In contrast, recent finding suggested the molecular aspects of olfactory dysfunction can be recognized as a hallmark of amyloidogenesis-related diseases and there may even be a causal link through the disruption of multivalent metal ion transport and storage.[25] Doctors can detect damage to the olfactory system by presenting the patient with odors via a scratch and sniff card or by having the patient close their eyes and try to identify commonly available odors like coffee or peppermint candy. Doctors must exclude other diseases that inhibit or eliminate ‘the sense of smell’ such as chronic colds or sinusitus before making the diagnosis that there is permanent damage to the olfactory system. 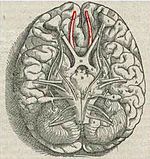 Age is the strongest reason for olfactory decline in healthy adults, having even greater impact than does cigarette smoking. Age-related changes in smell function often go unnoticed and smell ability is rarely tested clinically unlike hearing and vision. 2% of people under 65 years of age have chronic smelling problems. This increases greatly between people of ages 65 and 80 with about half experiencing significant problems smelling. Then for adults over 80, the numbers rise to almost 75%.[26] The basis for age-related changes in smell function include closure of the cribriform plate,[24] and cumulative damage to the olfactory receptors from repeated viral and other insults throughout life.

The most common cause of permanent hyposmia and anosmia are upper respiratory infections. Such dysfunctions show no change over time and can sometimes reflect damage not only to the olfactory epithelium, but also to the central olfactory structures as a result of viral invasions into the brain. Among these virus-related disorders are the common cold, hepatitis, influenza and influenza-like illness, as well as herpes. Most viral infections are unrecognizable because they are so mild or entirely asymptomatic.[24]

Chronic exposure to some airborne toxins such as herbicides, pesticides, solvents, and heavy metals (cadmium, chromium, nickel, and manganese), can alter the ability to smell.[27] These agents not only damage the olfactory epithelium, but they are likely to enter the brain via the olfactory mucosa.[28]

Trauma-related olfactory dysfunction depends on the severity of the trauma and whether strong acceleration/deceleration of the head occurred. Occipital and side impact causes more damage to the olfactory system than frontal impact.[29]

Neurologists have observed that olfactory dysfunction is a cardinal feature of several neurodegenerative diseases such as Alzheimer’s disease and Parkinson’s disease. Most of these patients are unaware of an olfactory deficit until after testing where 85% to 90% of early-stage patients showed decrease activity in central odor processing structures.[30]

Other neurodegenerative diseases that affect olfactory dysfunction include Huntington’s disease, multi-infarct dementia, amyotrophic lateral sclerosis, and schizophrenia. These diseases have more moderate effects on the olfactory system than Alzheimer’s or Parkinson’s diseases.[31] Furthermore, progressive supranuclear palsy and parkinsonism are associated with only minor olfactory problems. These findings have led to the suggestion that olfactory testing may help in the diagnosis of several different neurodegenerative diseases.[32]

Neurodegenerative diseases with well-established genetic determinants are also associated with olfactory dysfunction. Such dysfunction, for example, is found in patients with familial Parkinson’s disease and those with Down syndrome.[33] Further studies have concluded that the olfactory loss may be associated with intellectual disability, rather than any Alzheimer’s disease-like pathology.[34]

Huntington’s disease is also associated with problems in odor identification, detection, discrimination, and memory. The problem is prevalent once the phenotypic elements of the disorder appear, although it is unknown how far in advance the olfactory loss precedes the phenotypic expression