Just as miRNA is involved in the normal functioning of eukaryotic cells, so has dysregulation of miRNA been associated with disease.[141] A manually curated, publicly available database, miR2Disease, documents known relationships between miRNA dysregulation and human disease.[142]

A mutation in the seed region of miR-96, causes hereditary progressive hearing loss.[143]

A mutation in the seed region of miR-184, causes hereditary keratoconus with anterior polar cataract.[144]

Deletion of the miR-17~92 cluster, causes skeletal and growth defects.[145] 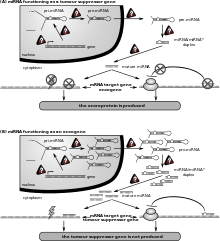 Role of miRNA in a cancer cell

The first human disease known to be associated with miRNA deregulation was chronic lymphocytic leukemia.[45] Many other miRNAs also have links with cancer[45] and accordingly are sometimes referred to as “oncomirs“. In malignant B cells miRNAs participate in pathways fundamental to B cell development like B-cell receptor (BCR) signalling, B-cell migration/adhesion, cell-cell interactions in immune niches and the production and class-switching of immunoglobulins. MiRNAs influence B cell maturation, generation of pre-, marginal zone, follicular, B1, plasma and memory B cells.[45]

A study of mice altered to produce excess c-Myc — a protein with mutated forms implicated in several cancers — shows that miRNA affects the cancer development. Mice engineered to produce a surplus of types of miRNA found in lymphoma cells developed the disease within 50 days and died two weeks later. In contrast, mice without the surplus miRNA lived over 100 days.[45] Leukemia can be caused by the insertion of a viral genome next to the 17-92 array of microRNAs, leading to increased expression of this microRNA.[45]

Another study found that two types of miRNA inhibit the E2F1 protein, which regulates cell proliferation. miRNA appears to bind to messenger RNA before it can be translated to proteins that switch genes on and off.[45]

By measuring activity among 217 genes encoding miRNAs, patterns of gene activity that can distinguish types of cancers were identified. miRNA profiling can determine whether patients with chronic lymphocytic leukemia had slow growing or aggressive forms of the cancer.[45]

A novel miRNA-profiling-based screening assay for the detection of early-stage colorectal cancer is undergoing a clinical trial. Early results showed that blood plasma samples collected from patients with early, resectable (Stage II) colorectal cancer could be distinguished from those of sex-and age-matched healthy volunteers. Sufficient selectivity and specificity could be achieved using small (less than 1 mL) samples of blood.[146][147]

Another role for miRNA in cancers is to use their expression level for prognoses. For example, one study on NSCLC samples found that low miR-324a levels could serve as an indicator of poor survival.[148] Either high miR-185 or low miR-133b levels may correlate with metastasis and poor survival in colorectal cancer.[149] Hepatocellular carcinoma cell proliferation may arise from miR-21 interaction with MAP2K3, a tumor repressor gene.[150] Optimal treatment for cancer involves accurately identifying patients for risk-stratified therapy. Those with a rapid response to initial treatment may benefit from truncated treatment regimens, showing the value of accurate disease response measures. Cell-free miRNA are highly stable in blood, are overexpressed in cancer and are quantifiable within the diagnostic laboratory. In classical Hodgkin lymphoma, plasma miR-21, miR-494, and miR-1973 are promising disease response biomarkers.[151] Circulating miRNAs have the potential to assist clinical decision making and aid interpretation of positron emission tomography combined with computerized tomography. They can be performed at each consultation to assess disease response and detect relapse.

A 2015 study used a triple helix of three miRNAs embedded in a dextran aldehyde/dendrimer gel in a mouse model of triple negative breast cancer. mir-205 and mir-212 targeted specific RNAs, while the other miRNA stabilized the others. The treatment reduced tumor sizes by 90% with survival times of 75 days.[154][155]

DNA damage is considered to be the primary underlying cause of cancer.[156] If DNA repair is deficient, damage can accumulate. Such damage can cause mutational errors during DNA replication due to error-prone translesion synthesis. Accumulated damage can also cause epigenetic alterations due to errors during DNA repair.[157][158] Such mutations and epigenetic alterations can give rise to cancer (see malignant neoplasms).

Germ line mutations in DNA repair genes cause only 2–5% of colon cancer cases.[159] However, altered expression of microRNAs, causing DNA repair deficiencies, are frequently associated with cancers and may be an important causal factor.