Summary: Under anesthesia, the nerve cells change their mode of operation by firing more synchronously, and by becoming surprisingly reactive to environmental stimuli, researchers report.

Even under deep anesthesia, nerve cells remain highly active. A study conducted by researchers from Charité – Universitätsmedizin Berlin has shown by high-resolution cellular imaging that local neuronal networks remain active even when the brain is unconscious. Under anesthesia, the nerve cells change their mode of operation by firing more synchronously, and by becoming surprisingly reactive to environmental stimuli. Results from this research have been published in the journal Frontiers in Cellular Neuroscience.

Establishing how the brain produces consciousness is one of the most challenging research questions in the field of neuroscience. In an effort to get closer to an answer, a team led by Dr. Mazahir T. Hasan, a researcher with Charité’s NeuroCure Cluster of Excellence, joined forces with colleagues from the Max Planck Institute for Medical Research in Heidelberg. By visualizing neuronal activity in the brains of mice, they were able to compare how brain activity differs in conscious and anesthetized mice. NeuroCure’s Dr. Hasan explains: “We used a fluorescent protein that converts electrical signals into light signals. This enabled us to visualize the frequency and average amplitude of neuronal responses, and allowed us to reveal the existence of neuronal synchrony.” Results from this research would suggest that consciousness is not simply dependent on the number of active neurons inside the cortex; instead, it seems to be dependent upon the way these nerve cells communicate and on the degree to which they manage to differ in terms of their activity patterns.

The awake cortex showed complex activity patterns, with individual cells firing at different times. Under anesthesia, all neurons displayed identical activity patterns and fired at the same time. “While one might expect the brain to cease its activity under anesthesia, in reality, the situation is quite different. Neurons remain highly active but change their communication mode. During unconsciousness they become highly synchonized – in simple terms all neurons start doing the same thing. ” explains Mr. Thomas Lissek, a neurobiologist from Heidelberg and the study’s first author. Another surprising finding was that neurons were more sensitive to environmental stimuli under anesthesia than when the brain was awake. “This is especially surprising, as anesthesia is used to block both pain and environmental stimuli during surgery,” says Mr. Lissek. Some of the brain regions that are normally dedicated to tactile perception even responded to sound information. 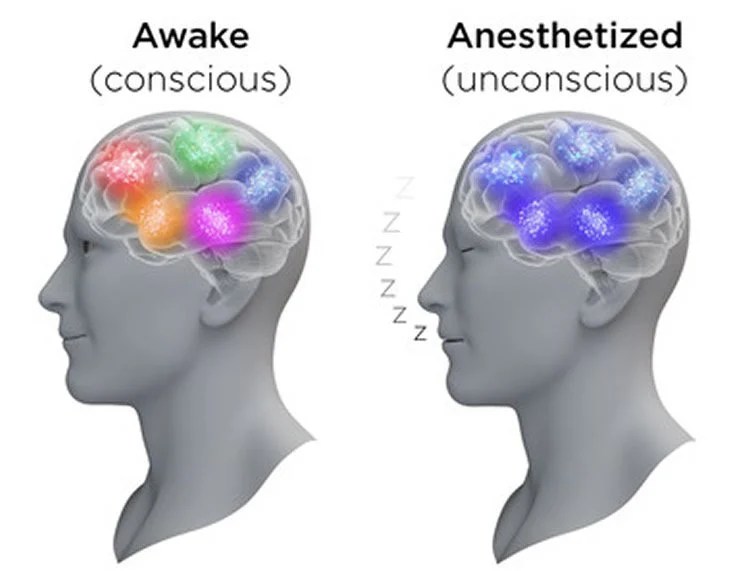 These new insights into neuronal activity patterns provide information regarding the identity of the cellular parameters involved in producing consciousness and the loss of consciousness. Once combined with further advances that would allow us to measure neuronal activity inside the human brain, these findings could contribute to improving our diagnostic capabilities in conditions such as coma and locked-in syndrome. For the first time, this study succeeded in showing that it is possible to observe visually identifiable neuronal networks over a period of several weeks in order to study the after-effects of anesthesia. “It is clear that investigation of anesthesia will produce deep insights into the mechanism of consciousness”, emphasizes Hasan.

General anesthetics are commonly used in animal models to study how sensory signals are represented in the brain. Here, we used two-photon (2P) calcium activity imaging with cellular resolution to investigate how neuronal activity in layer 2/3 of the mouse barrel cortex is modified under the influence of different concentrations of chemically distinct general anesthetics. Our results show that a high isoflurane dose induces synchrony in local neuronal networks and these cortical activity patterns closely resemble those observed in EEG recordings under deep anesthesia. Moreover, ketamine and urethane also induced similar activity patterns. While investigating the effects of deep isoflurane anesthesia on whisker and auditory evoked responses in the barrel cortex, we found that dedicated spatial regions for sensory signal processing become disrupted. We propose that our isoflurane-2P imaging paradigm can serve as an attractive model system to dissect cellular and molecular mechanisms that induce the anesthetic state, and it might also provide important insight into sleep-like brain states and consciousness.