Herpes and other viruses that attack the nervous system may thrive by disrupting cell function in order to hijack a neuron’s internal transportation network and spread to other cells.

Princeton University researchers made the first observation in neurons that common strains of the herpes virus indirectly take control of a cell’s mitochondria, the mobile organelles that regulate a cell’s energy supply, communication with other cells, and self-destruction response to infection. The team reports in the journal Cell Host and Microbe that viral infection elevates neuron activity, as well as the cell’s level of calcium — a key chemical in cell communication — and brings mitochondrial motion to a halt in the cell’s axon, which connects to and allows communication with other neurons.

The authors propose that the viruses then commandeer the proteins that mitochondria typically use to move about the cell. The pathogens can then freely travel and reproduce within the infected neuron and more easily spread to uninfected cells. When the researchers made the mitochondria less sensitive to calcium the viruses could not spread as quickly or easily.

These findings reveal a previously unknown and highly efficient mechanism that some of the most common strains of herpes viruses in humans may use to proliferate in the nervous system, said lead author Tal Kramer, a doctoral student in the lab of the paper’s co-author Lynn Enquist, the Henry L. Hillman Professor of Molecular Biology and chair of Princeton’s molecular biology department.

“No one before has looked carefully at mitochondrial motion during alpha-herpes virus infection in neurons. We provide new insight into how these viruses damage cells in the nervous system in ways that are important for the virus to propagate,” Kramer said.

“If mitochondria are stopped in their tracks and can’t go anywhere, that is potentially very bad,” he said. “They are not only the power plants of the cell, but regulate important processes. The virus likely acts to interfere with many of those processes.”

Beyond herpes, the Princeton findings present a possible explanation for how other neurotropic viruses such as rabies, West Nile and polio attack and disrupt the nervous system, Kramer said. Although these viruses are different from the herpes family, the fact that HSV-1 and PRV had a similar effect on mitochondrial motion and function suggests that other pathogens could corrupt mitochondria in the same way, he said. 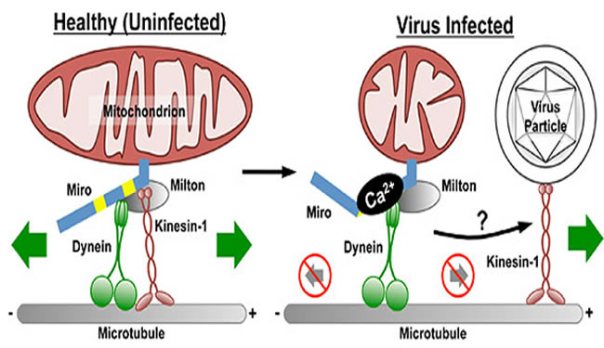 In a healthy neuron (left), mitochondria are carried along by motor proteins dynein and kinesin-1. Viral infection (right) floods the cell with calcium (Ca2+), which, when detected by the mitochondrial protein Miro, brings mitochondria to a halt and causes them to shed motor proteins. The Princeton researchers suggest that the virus then co-opts kinesin-1 to freely move within the infected cell and spread into the nervous system. The research presents a possible explanation for how other neurotropic viruses such as rabies, West Nile and polio also attack and disrupt the nervous system. Image by Tal Kramer.

In addition, the paper lays out the implications of distorted mitochondrial function on neuron health. Mitochondrial malfunction is a known factor in non-infectious neurodegenerative conditions such as Alzheimer’s disease and Parkinson’s disease, Kramer said, though the pathway to this disruption is not entirely known.

“Our model raises some new and exciting possibilities for future research on other important human viruses that can invade the nervous system and cause disease,” Kramer said.

“And the fact that alpha-herpes infection damages the same key cellular function as neurodegenerative disorders also is striking,” he said. “Understanding how viral infection damages neurons might give us insight into how diseases like Alzheimer’s do the same. The viruses we study hijack well-studied cellular pathways that might make an effective target for future therapeutic strategies.”

Calcium plays a key role in this cell communication, Kramer explained. A neuron experiences a spike in calcium levels in the axon and synapses when it receives a signal from another neuron. Though a natural rover, mitochondria contain a protein called Miro that detects this rush of calcium and stops the organelles in the synapse. The mitochondria then provide energy as the cell passes a signal along to the next neuron.

Through live-cell imaging of neurons grown in the Enquist lab, Kramer and Enquist observed how this process becomes corrupted by HSV-1 and PRV — and how the viruses need the process to spread.

The chaos begins when the virus ramps up the neuron’s firing of electrical signals, as was first reported in a 2009 paper published in the journal PLoS Pathogens by Enquist; first author Kelly McCarthy, a past member of Enquist’s lab who received her doctoral degree from Princeton in 2011; and David Tank, the Henry L. Hillman Professor of Molecular Biology and co-director of the Princeton Neuroscience Institute.

In the latest research, Kramer and Enquist found that this spike in electrical activity floods the axon and synapses with calcium. As a consequence, the Miro proteins detect the increase in calcium and stop mitochondrial motion. The virus’ control over the cell immediately dropped off, however, when Kramer and Enquist interfered with Miro’s ability to respond to the uptick in calcium levels. Though the viral infection was not completely disrupted, it could not spread within or to other cells with the same efficiency.

Based on these observations, Kramer and Enquist suggest that viruses such as HSV-1 and PRV may bring mitochondria to a standstill in order to hijack their transportation. Mitochondria move about the neuron on the backs of motor proteins dynein and kinesin-1. During viral infection, mitochondria shed these proteins to stop moving when Miro detects an upsurge in cellular calcium.

Previous research has shown that HSV-1 and PRV also use kinesin-1 specifically for transport within an infected cell. Thus, Kramer said, his and Enquist’s work suggests that it is very likely that the viruses disrupt mitochondrial motility so that they can hitch themselves to the now available kinesin-1 proteins and move through the nervous system more efficiently.

James Alwine, a University of Pennsylvania professor of cancer biology, said that the Princeton research is a significant contribution to a growing body of research that describes how viruses seize cellular motor proteins such as kinesin-1.

While the findings have therapeutic potential — particularly in helping show how balancing cellular calcium might subdue viral infection — the demonstration that viruses can move through an infected cell with the ease of something as essential as mitochondria is notable in itself, said Alwine, who is familiar with the research but had no role in it.

“Determining the specific mechanism by which Miro function is abrogated may provide additional therapeutic avenues, but this also is marvelous basic research that does not have to be justified by its therapeutic potential,” he said.

“To disrupt the loading of mitochondria to motor proteins so that virions [complete virus particles] can load instead is a clever way for a virus to be transported and is a great new idea provoked by this data,” Alwine said. “While other neurotropic viruses would have to be tested specifically, movement in nerve cells is required by all of them. Thus, this observation provides a starting place and a model mechanism for research with those other pathogens.”

Notes about this neuroscience research article

This research was published May 17 in the journal Cell Host and Microbe, and supported by the National Institutes of Health and a National Science Foundation Graduate Research Grant.