Cofactors, mostly metal ions or coenzymes, are inorganic and organic chemicals that assist enzymes during the catalysis of reactions. Coenzymes are non-protein organic molecules that are mostly derivatives of vitamins soluble in water by phosphorylation; they bind apoenzyme to proteins to produce an active holoenzyme. Apoenzymes are enzymes that lack their necessary cofactor(s) for proper functioning; the binding of the enzyme to a coenzyme forms a holoenzyme. Holoenzymes are the active form of an apoenzyme. 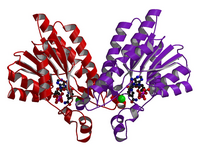 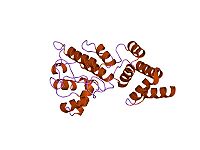 Cofactors can be metals or coenzymes, and their primary function is to assist in enzyme activity. They are able to assist in performing certain, necessary, reactions the enzyme cannot perform alone. They are divided into coenzymes and prosthetic groups. A holoenzyme refers to a catalytically active enzyme that consists of both apoenzyme (enzyme without its cofactor(s)) and cofactor. There are two groups of cofactors: metals and small organic molecules called coenzymes. Coenzymes are small organic molecules usually obtained from vitamins. Prosthetic groups refer to tightly bound coenzymes, while cosubstratesrefer to loosely bound coenzymes that are released in the same way as substrates and products. Loosely bound coenzymes differ from substrates in that the same coenzymes may be used by different enzymes in order to bring about proper enzyme activity.

Enzymes without their necessary cofactors are called apoenzymes, which are the inactive form of an enzyme. Cofactors with an apoenzyme are called a holoenzyme, which is the active form.
General formula

Metal ions are known as the common cofactors. In some enzymes, the function as a catalyst cannot be carried out if a metal ion is not available to be bound the active site. In daily nutrition, this kind of cofactor plays a role as the essential trace elements such as: iron (Fe3+), manganese (Mn2+), cobalt (Co2+), copper (Cu2+), zinc (Zn2+), selenium (Se2+), and molybdenum (Mo5+). For example, Mg2 is used in glycolysis. In the first step of converting glucose to glucose 6-phosphate, before ATP is used to give ADP and one phosphate group, ATP is bonded to Mg2 which stabilizing the other two phosphate groups so it is easier to release only one phosphate group without resonate with other two. In some bacteria such as genus Azotobacter and Pyrococcus furiosus, metal cofactors are also discovered to play an important role. An example of cofactors in action is the zinc-mediated function of carbonic anhydrase or the magnesium-mediated function of restriction endonuclease.

A coenzyme is a small, organic, non-protein molecules that carries chemical groups between enzymes. It is the cofactor for the enzyme and does not form a permanent part in the enzyme’s structure. Sometimes, they are called cosubstrates and are considered substrates that are loosely bound to the enzyme. In metabolism, coenzymes play a role in group-transfer reactions, such as ATP and coenzyme A, and oxidation-reduction reactions, such as NAD+ and coenzyme Q10. Coenzymes are frequently consumed and recycled. Chemical groups are added and detached continuously by an enzyme. ATP synthase enzyme phosphorylates and converts the ADP to ATP, while Kinase dephosphorylates the ATP back to ADP at continuous rates as well. Coenzyme molecules are mostly derived from vitamins. They are also commonly made from nucleotides such as adenosine triphosphate and coenzyme A.

Through further research in coenzyme activity and its binding effect on the enzyme, more can be revealed about how the enzyme changes conformationally and functionally. An example is of the MAPEG group of integral membrane enzymes. These enzymes are crucial in the catalytic transformation of lipophilic substrates, which are involved in arachidonic acid derived messengers production and xenobiotic detoxification. Through use of a bound detergent to mimic a MAPEG enzyme’s cofactor, glutathione, a new active site specific for lipophilic substrate is revealed; thus, further studies can reveal how these substrates bind to this second form of the enzyme [1].

Vitamin C is an important coenzyme 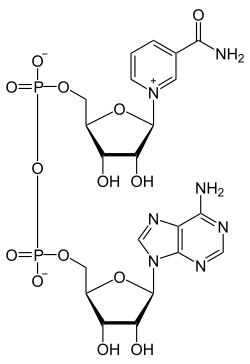 nicotinamide adenine dinucleotide is a coenzyme derived from vitamin B3. NAD+ is capable of carrying and transferring electrons and functions as oxidizing agent in redox reactions. It also works as a substrate for DNA ligases in posttranslational modification, where the reaction removes acetyl groups from proteins. Furthermore, in glycolysis and the citric acid cycle, NAD+ oxidizes glucose and releases energy, which is then transferred to NAD+ by reduction to NADH. NADH later on unloads the extra electron through oxidative phosphorylation to generate ATP, which is the energy source humans use every day. In addition to catabolic reactions, NADH is also involved in anabolic reactions such as gluconeogenesis, and it also aids in the production of neurotransmitters in the brain.

flavin adenine dinucleotide is a prosthetic group that, like NADH, functions as a reducing agent in cellular respiration and donates electrons to the electron transport chain.

compounds that have fully conjugated aromatic rings to which two oxygen atoms are bounded as carbonyl groups (i.e. diketones). Quinone’s structure gives them the ability to form substances with colors. They exist as pigments in bacteria, fungi, and certain plants, and give them their characteristic colors. In addition, they are used to manufacture different color dyes for industrial purposes. In biological systems, they serve as electron acceptors (oxidizing agents) in electron transport chains such as those in photosynthesis and aerobic respiration. Many natural or synthetic quinines show biological or pharmacological activities, and some event show antitumoral activities.

coenzyme A, synthesized from pantothenic acid ATP, functions as acyl group carriers to transport functional groups such as acetyl (acetyl-CoA) or thioesters in metabolic reactions like fatty acid oxidation (synthesis of fatty acids) and citric acid cycle (cellular respiration). It also transfers fatty acids from cytoplasm to mitochondria. In addition to its transporter role in metabolism, CoA is also an important molecule in itself. For instance, CoA is an important precursor to HMG-CoA, an important enzyme in the metabolic synthesis of cholesterol and ketones. Furthermore, it contributes the acetyl group to the structure of acetylcholine, which is an important neurotransmitter responsible for inducing muscle contraction.

Vitamin A is subdivided into two molecules, Vitamin A1 (retinol) and Vitamin A2 (dehydroretinol). Retinol is the most active and common form. Vitamin A has a large conjugated chain which serves as the reactive site of the molecule. Unlike most cofactors, Vitamin A undergoes a sequence of chemical changes (oxidations, reductions, and isomerizations) before returning to its original form. The ability for Vitamin A’s electrons to travel from &pi to &pi* orbital makes it a good candidate molecule for trapping light energy. Consequently, Vitamin A is responsible for transferring light energy to a chemical nerve impulse in the eyeball. Vitamin A is also used for growing healthy new cells such as skin, bones, and hair. It maintains the lining of the urinary tract, intestinal tract, and respiratory system. Additionally, Vitamin A is required for the reproductive functions such as the growth and development of sperm and ovaries.

Also known as absorbic acid, Vitamin C is quite abundant in most plants and animals excluding primates, guinea pigs, bats, and some birds. Despite human’s inability to synthesis absorbic acid, it is an essential in many biosynthetic pathways such as synthesizing collagen. Deficiency leads to a disease called Scurvy. Vitamin C helps regulate the immune system and relieve pain caused by tired muscles. It also is needed in the manufacture of collagen and norepinephrine. Vitamin C is also an antioxidant which can enhance the immune system by stimulating white blood cells in the body. Vitamin C also helps to benefit the skin, teeth, and bones.

Also named Thiamine or Thiamine diphosphate (TPP), Vitamin B1 is a cofactor for oxidative decarboxylation both in the Kreb’s Cycle and in converting pyruvate to acetyl-CoA (an important molecule used in the citric acid cycle of metabolism). It is widely available in the human diet and particularly potent in wheat germ and yeast. It’s functionality results from a thiazole ring which stabilizes charge and electron transfer through resonance.

Vitamin B3 is Niacin or nicotinic acid with the formula C5H4NCO2H. Vitamin B3 is a precursor to NADH, NAD+, NADP+ and NADPH which are coenzymes found in all living cells. NAD+ and NADP+ are oxidizing agents. NADH and NADPH are reducing agents.

Vitamin B6 is precursor to coenzyme pyridoxal phosphate (PLP) which is required in certain transformation of amino acids including transamination, deamination, and decarboxylation.

Vitamin B12 is the name for a class of related compounds that have this vitamin activity. These compounds contain the rare element cobalt. Humans can not synthesis B12 and must obtain it from diet. Enzymes that catalyze certain rearrangement reaction required B12 or its derivatives.

Also named Biotin, Vitamin H is a carboxyl carrier; it binds CO2 and carries it until the CO2 is donated in carboxylase reactions. It is water soluble and important in the metabolism of fatty acids and the amino acid Leucine. Deficiency leads to dermatitis and hair loss, thus making it a popular ingredient in cosmetics.

The coactivator can enhance transcription initiation by stabilizing the formation of the RNA polymerase holoenzyme enabling faster clearance of the promoter.

The corepressor can repress transcriptional initiation by recruiting histone deacetylases which catalyze the removal of acetyl groups from lysine residues. This increases the positive charge on histones which strengthens in the interaction between the histones and DNA, making the latter less accessible to transcription.