Sarin, or GB (G-series, ‘B’), is a colorless, odorless liquid,[5] used as a chemical weapon due to its extreme potency as a nerve agent. It is generally considered a weapon of mass destruction. Production and stockpiling of sarin was outlawed as of April 1997 by the Chemical Weapons Convention of 1993, and it is classified as a Schedule 1 substance. In June 1994, the UN Special Commission on Iraqi disarmament destroyed the nerve agent sarin under Security Council resolution 687 (1991) concerning the disposal of Iraq’s weapons of mass destruction.[6]

Sarin is an organophosphorus compound with the formula [(CH3)2CHO]CH3P(O)F. It can be lethal even at very low concentrations, where death can occur within one[7][8] to ten minutes after direct inhalation of a lethal dose, due to suffocation from lung muscle paralysis, unless some antidotes, typically atropine and an oxime, such as pralidoxime, are quickly administered.[5]People who absorb a non-lethal dose, but do not receive immediate medical treatment, may suffer permanent neurological damage.

Sarin is a chiral molecule because it has four chemically distinct substituents attached to the tetrahedral phosphorus center.[9] The SP form (the (–) optical isomer) is the more active enantiomer due to its greater binding affinity to acetylcholinesterase.[10][11] The P-F bond is easily broken by nucleophilic agents, such as water and hydroxide. At high pH, sarin decomposes rapidly to nontoxic phosphonic acid derivatives.

It is usually manufactured and weaponized as a racemic mixture—an equal mixture of both enantiomeric forms, as this is a simpler process and provides an adequate weapon.

A number of production pathways can be used to create sarin. The final reaction typically involves attachment of the isopropoxy group to the phosphorus with an alcoholysis with isopropyl alcohol. Two variants of this process are common. One is the reaction of methylphosphonyl difluoride with isopropyl alcohol, which produces hydrofluoric acid as a byproduct:

The second process, uses equal quantities of methylphosphonyl difluoride and methylphosphonic dichloride, a mixture “Di-Di” in this process, rather than just the difluoride. This reaction also gives sarin, but hydrochloric acid as a byproduct instead. The Di-Di process was used by the United States for the production of its unitary sarin stockpile.[12]

The scheme below describes an example of Di-Di process. The selection of reagents is arbitrary and reaction conditions and product yield depend on the selected reagents. Inert atmosphere and anhydrous conditions are used for synthesis of sarin and other organophosphates. 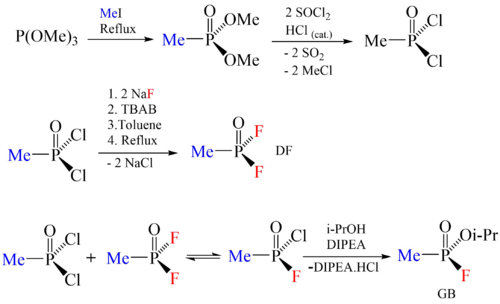 As both reactions leave considerable acid in the product, bulk sarin produced without further treatment has a very poor shelf life and would be rather destructive to containers or weapon systems. Various methods have been tried to resolve these problems. In addition to industrial refining techniques to purify the chemical itself, various additives have been tried to combat the effects of the acid, such as: Like all other nerve agents, sarin attacks the nervous system by interfering with the degradation of the neurotransmitter acetylcholine at neuromuscular junctions. Death will usually occur as a result of asphyxia due to the inability to control the muscles involved in breathing function.

Sarin acts on cholinesterase by forming a covalent bond with the particular serine residue at the active site. Fluoride is the leaving group, and the resulting phosphoester is robust and biologically inactive.[21][22] 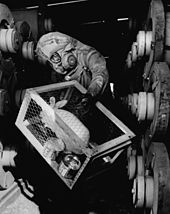 The most important chemical reactions of phosphoryl halides is the hydrolysis of the bond between phosphorus and the fluoride. This P-F bond is easily broken by nucleophilic agents, such as water and hydroxide. At high pH, sarin decomposes rapidly to nontoxic phosphonic acid derivatives.[23][24] The initial breakdown of sarin is into isopropyl methylphosphonic acid (IMPA), a chemical that is not commonly found in nature except as a breakdown product of sarin (this is useful for detecting the recent deployment of sarin as a weapon). IMPA then degrades into methylphosphonic acid (MPA), which can also be produced by other organophosphates.[25]

Sarin without the residual acid removed degrades after a period of several weeks to several months. The shelf life can be shortened by impurities in precursor materials. According to the CIA, some Iraqi sarin had a shelf life of only a few weeks, owing mostly to impure precursors.[26]

Along with nerve agents such as tabun and VX, sarin can have a maximum shelf-life of five years.[27] Sarin’s otherwise-short shelf life can be extended by increasing the purity of the precursor and intermediates and incorporating stabilizers such as tributylamine. In some formulations, tributylamine is replaced by diisopropylcarbodiimide (DIC), allowing sarin to be stored in aluminium casings. In binary chemical weapons, the two precursors are stored separately in the same shell and mixed to form the agent immediately before or when the shell is in flight. This approach has the dual benefit of solving the stability issue and increasing the safety of sarin munitions.

Sarin has a high volatility (ease with which a liquid can turn into a gas) relative to similar nerve agents, therefore inhalation can be very dangerous and even vapor concentrations may immediately penetrate the skin. A person’s clothing can release sarin for about 30 minutes after it has come in contact with sarin gas, which can lead to exposure of other people.[28]

Even at very low concentrations, sarin can be fatal. Death may follow in 1 to 10 minutes after direct inhalation of a lethal dose unless antidotes, typically atropine and pralidoxime, are quickly administered.[5] Atropine, an antagonist to muscarinic acetylcholine receptors, is given to treat the physiological symptoms of poisoning. Since muscular response to acetylcholine is mediated through nicotinic acetylcholine receptors, atropine does not counteract the muscular symptoms. Pralidoxime can regenerate cholinesterases if administered within approximately five hours. Biperiden, a synthetic acetylcholine antagonist, has been suggested as an alternative to atropine due to its better blood–brain barrier penetration and higher efficacy.[29]

As a nerve gas, sarin in its purest form is estimated to be 26 times more deadly than cyanide.[30] The LD50 of subcutaneously injected sarin in mice is 172 μg/kg.[31] Treatment measures have been described.[32]

Initial symptoms following exposure to sarin are a runny nose, tightness in the chest and constriction of the pupils. Soon after, the victim has difficulty breathing and experiences nausea and drooling. As the victim continues to lose control of bodily functions, the victim vomits, defecates and urinates. This phase is followed by twitching and jerking. Ultimately, the victim becomes comatose and suffocates in a series of convulsive spasms. Moreover, common mnemonics for the symptomatology of organophosphate poisoning, including sarin gas, are the “killer B’s” of bronchorrhea and bronchospasm because they are the leading cause of death,[33] and SLUDGE – Salivation, Lacrimation, Urination, Defecation, Gastrointestinal distress, and Emesis.

Controlled studies in healthy men have shown that a nontoxic 0.43 mg oral dose administered in several portions over a 3-day interval caused average maximum depressions of 22 and 30%, respectively, in plasma and erythrocyte cholinesterase levels. A single acute 0.5 mg dose caused mild symptoms of intoxication and an average reduction of 38% in both measures of cholinesterase activity. Sarin in blood is rapidly degraded either in vivo or in vitro. Its primary inactive metabolites have in vivo serum half-lives of approximately 24 hours. The serum level of unbound isopropylmethylphosphonic acid (IMPA), a sarin hydrolysis product, ranged from 2-135 µg/L in survivors of a terrorist attack during the first 4 hours post-exposure. Sarin or its metabolites may be determined in blood or urine by gas or liquid chromatography, while cholinesterase activity is usually measured by enzymatic methods.[34]

A newer method called “Fluoride Regeneration” or “Fluoride Reactivation” detects the presence of nerve agents for a longer period after exposure than the methods described above. Fluoride reactivation is a technique has been explored since at least the early 2000s. This technique obviates some of the deficiencies of older procedures. Sarin not only reacts with the water in the blood plasma through hydrolysis (forming so-called ‘free metabolites’), but also reacts with various proteins to form ‘protein adducts’. These protein adducts are not so easily removed from the body, and remain for a longer period of time than the free metabolites. One clear advantage of this process is that the period, post-exposure, for determination of Sarin exposure is much longer, possibly 5 to 8 weeks according to at least one study.[35][36]

Sarin is highly toxic, whether by respiratory or dermal exposure. The toxicity of sarin in humans is largely based on calculations from studies with animals. The general consensus is that the lethal concentration of sarin in air is approximately 35 mg per cubic meter per minute for a two-minute exposure time by a healthy adult breathing normally (exchanging 15 liters of air per minute). This number represents the estimated lethal concentration for 50% of exposed victims, the LCt50 value. There are many ways to make relative comparisons between toxic substances. The list below compares some current and historic chemical warfare agents with sarin, with a direct comparison to the respiratory Lct50:

Sarin was discovered in 1938 in Wuppertal-Elberfeld in Germany by scientists at IG Farben who were attempting to create stronger pesticides; it is the most toxic of the four G-Series nerve agents made by Germany. The compound, which followed the discovery of the nerve agent tabun, was named in honor of its discoverers: Schrader, Ambros, Gerhard Ritter, and von der Linde.[39]

Even at very low concentrations, sarin can be fatal. Death may follow in 1 to 10 minutes after direct inhalation of a lethal dose unless antidotes, typically atropine and pralidoxime, are quickly administered.