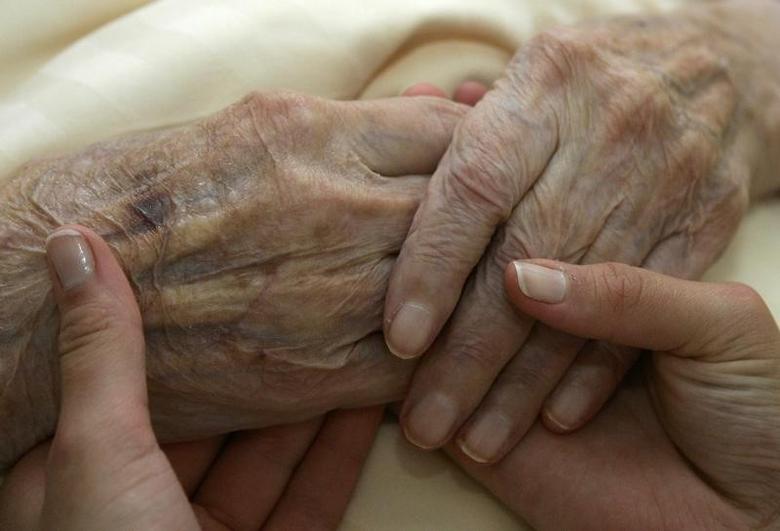 A young carer holds the hands of an elderly woman in a residential home for the elderly in Planegg near Munich in this June 19, 2007 file photo.Michaela Rehle/Files
By Madeline Kennedy

(Reuters Health) – Different types of problems are most likely to afflict people at different times of life, so common risk factors for depression change over the years, too, Dutch researchers say.

But when a risk factor is uncommon among peers – like widowhood or poor health in youth – it can have an outsized effect on depression risk, the study team reports in The American Journal of Geriatric Psychiatry.

“However, some risk factors expected to be strongly related to depression in certain ages, may actually affect other age groups to a larger extent,” Schaakxs added by email.

Depression is a complex condition and many experts believe that in addition to innate genetic and personality factors, risks like stressful life events, health issues and money problems can contribute to its development, the study team notes.

To see which depression risk factors affect people at various stages of life, and how much of an effect each factor has, the study team analyzed data on more than 2,000 adults participating in two long-term studies of depression and anxiety. Subjects in one study were aged 18 to 65 when they began participating, while participants in the other study were aged 60 to 93 when it started.

At baseline, a total of 1,431 people had major depressive disorder and 784 people had no symptoms or history of the condition.

The research team assessed 19 different risk factors for depression in different age groups, comparing people who had never been depressed with people who were currently depressed.

Most of the risk factors did increase people’s likelihood of being depressed at any age, including low education, recent negative life events, personality traits, reduced social functioning, an unhealthy lifestyle and poor health.

However, five of the risk factors were more strongly related to depression in certain age groups.

For people aged 18 to 39, health factors like overweight or obesity, pain, childhood abuse and chronic disease were strongly associated with depression. For those over 60, low income was a greater risk for depression than in other age groups.

People with risk factors that were “unexpected” based on their age also had a higher depression risk than those in other age groups where the same risk factor was more common, researchers found.

When young people are struggling with circumstances like illness or loneliness, it may come as a surprise and they may not have the skills to cope, said Patricia Arean, a professor of psychiatry and behavioral sciences at the University of Washington in Seattle.

She stressed the importance of screening young people with chronic illnesses for depression. “Fortunately, prevention interventions for depression are also good for health care: get good sleep, rest, exercise regularly, reach out to friends and family,” said Arean, who was not involved in the current study.

“When an unexpected life event happens, pay close attention to your reaction to it,” Arean said by email. “If you find that you are struggling with your mood, energy, interest in things, concentration for more than two weeks, Do Not Ignore those symptoms. Go see your doctor and get help.”

“General practitioners and therapists should not overlook risk factors for depression by assuming the risk factor is less relevant at a certain age,” Schaakxs advised.

One thought on “As people age, the factors that drive depression may shift”