It has been demonstrated that prolonged psychological stress could be linked with increased risk of infection via viral respiratory infection.  Stress as expressed in deliruim episodes after multiple surgeries weakens the immune system.

During the last 3 days, I have been taking care of a client with lung and colon cancers. With more than 5 surgeries in the past 20 days, his first night back to his house is full of stressful nights, restless leg syndrome, bad dreams and intermittent/interrupted sleep coupled with delirium. On the third night, with the company of a caregiver, he was able to relax and sleep more.  Stress after multiple surgeries is taking a toll in his body, which is already compromised as he has been fighting cancer during the last 12 months and chemo cannot reduce its severity. He is now more sensitive to noise and temperature changes. 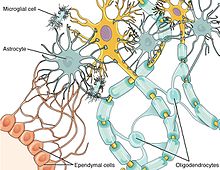 Different types of glial cells including microglia, astroglia and oligodendrocytes.

Neurons and glial cells work in conjunction to combat intruding pathogens and injury. Chemokines play a prominent role as a mediator between neuron-glial cell communication since both cell types express chemokine receptors.[7] For example, the chemokine fractalkine has been implicated in communication between microglia and dorsal root ganglion (DRG) neurons in the spinal cord.[13] Fractalkine has been associated with hypersensitivity to pain when injected in vivo, and has been found to upregulate inflammatory mediating molecules.[13] Glial cells can effectively recognize pathogens in both the central nervous system and in peripheral tissues.[14] When glial cells recognize foreign pathogens through the use of cytokine and chemokine signaling, they are able to relay this information to the CNS.[14] The result is an increase in depressive symptoms.[14] Chronic activation of glial cells however leads to neurodegeneration and neuroinflammation.[14]

Microglial cells are of the most prominent types of glial cells in the brain. One of their main functions is phagocytozing cellular debris following neuronal apoptosis.[14] Following apoptosis, dead neurons secrete chemical signals that bind to microglial cells and cause them to devour harmful debris from the surrounding nervous tissue.[14] Microglia and the complement system are also associated with synaptic pruning as their secretions of cytokines, growth factors and other complements all aid in the removal of obsolete synapses.[14]

Astrocytes are another type of glial cell that among other functions, modulate the entry of immune cells into the CNS via the blood–brain barrier (BBB).[14] Astrocytes also release various cytokines and neurotrophins that allow for immune cell entry into the CNS; these recruited immune cells target both pathogens and damaged nervous tissue.[14] 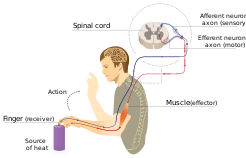 The withdrawal reflex is a reflex that protects an organism from harmful stimuli.[12] This reflex occurs when noxious stimuli activate nociceptors that send an action potential to nerves in the spine, which then innervate effector muscles and cause a sudden jerk to move the organism away from the dangerous stimuli.[10] The withdrawal reflex involves both the nervous and immune systems.[10] When the action potential travels back down the spinal nerve network, another impulse travels to peripheral sensory neurons that secrete amino acids and neuropeptides like calcitonin gene-related peptide (CGRP) and Substance P.[10][12] These chemicals act by increasing the redness, swelling of damaged tissues, and attachment of immune cells to endothelial tissue, thereby increasing the permeability of immune cells across capillaries.[10][12]

Reflex response to pathogens and toxins

Neuroimmune interactions also occur when pathogens, allergens, or toxins invade an organism.[10] The vagus nerve connects to the gut and airways and elicits nerve impulses to the brainstem in response to the detection of toxins and pathogens.[10] This electrical impulse that travels down from the brain stem travels to mucosal cells and stimulates the secretion of mucus; this impulse can also cause ejection of the toxin by muscle contractions that cause vomiting or diarrhea.[10]

The neuroimmune system is involved in reflexes associated with parasitic invasions of hosts. Nociceptors are also associated with the body’s reflexes to pathogens as they are in strategic locations, such as airways and intestinal tissues, to induce muscle contractions that cause scratching, vomiting, and coughing.[10] These reflexes are all designed to eject pathogens from the body. For example, scratching is induced by pruritogens that stimulate nociceptors on epidermal tissues.[10] These pruritogens, like histamine, also cause other immune cells to secrete further pruritogens in an effort to cause more itching to physically remove parasitic invaders.[10] In terms of intestinal and bronchial parasites, vomiting, coughing, and diarrhea can also be caused by nociceptor stimulation in infected tissues, and nerve impulses originating from the brain stem that innervate respective smooth muscles.[10]

Due to neuroimmune system interplay, asthmatics are more sensitive to pollutants and irritants than non asthmatics.[10] It has been reported that allergic inflammation, caused by the release of eosinophils in response to capsaicin, can trigger further sensory sensitization to the molecule.[15] Patients with chronic cough also have an enhanced cough reflex to pathogens even if the pathogen has been expelled.[15] In both cases, the release of eosinophils and other immune molecules cause a hypersensitization of sensory neurons in bronchial airways that produce enhanced symptoms.[10][15] It has also been reported that increased immune cell secretions of neurotrophins in response to pollutants and irritants can restructure the peripheral network of nerves in the airways to allow for a more primed state for sensory neurons.[10]

It has been demonstrated that prolonged psychological stress could be linked with increased risk of infection via viral respiratory infection. Studies, in animals, indicate that psychological stress raises glucocorticoid levels and eventually, an increase in susceptibility to streptococcal skin infections.[16]

The neuroimmune system plays a role in Alzheimer’s disease. In particular, microglia may be protective by promoting phagocytosis and removal of amyloid-β (Aβ) deposits, but also become dysfunctional as disease progresses, producing neurotoxins, ceasing to clear Aβ deposits, and producing cytokines that further promote Aβ deposition.[17] It has been shown that in Alzheimer’s disease, amyloid-β directly activates microglia and other monocytes to produce neurotoxins.[18]

Astrocytes have also been implicated in multiple sclerosis (MS). Astrocytes are responsible for demyelination and the destruction of oligodendrocytes that is associated with the disease.[14] This demyelinating effect is a result of the secretion of cytokines and matrix metalloproteinases (MMP) from activated astrocyte cells onto neighboring neurons.[14] Astrocytes that remain in an activated state form glial scars that also prevent the re-myelination of neurons, as they are a physical impediment to oligodendrocyte progenitor cells (OPCs).[19]

The neuroimmune system is also involved in asthma and chronic cough, as both are a result of the hypersensitized state of sensory neurons due to the release of immune molecules and positive feedback mechanisms.[1