Oxycodone is a semisynthetic opioid synthesized from thebaine, an opioid alkaloid found in the Persian poppy, and one of the many alkaloids found in the opium poppy. It is a moderately potent opioid pain medication (orally roughly 1.5 times more potent than morphine),[8] generally indicated for relief of moderate to severe pain.[9] Oxycodone was developed in 1917 in Germany[10][11] as one of several semi-synthetic opioids in an attempt to improve on the existing opioids.[1]

Oxycodone is available as single-ingredient medication in immediate release and controlled release. In the United Kingdom, it is available in 10 mg/mL and 50 mg/mL formulation for intramuscular or intravenous administration.[12]Combination products are also available as immediate-release formulations, with non-narcotic analgesic ingredients such as paracetamol (acetaminophen) and nonsteroidal anti-inflammatory drugs (NSAIDs), including aspirin and ibuprofen.

As it has euphoric effects similar to other opioids, oxycodone is one of the drugs abused in the current opioid epidemic in the United States.[13][14] An abuse-deterrent combination with naloxone is available in managed-release tablets. If injected, the naloxone precipitates opioid withdrawal symptoms and blocks the effect of the medication. However, there have been concerns raised about the effectiveness of the abuse prevention measures.[14][15]

Oxycodone has been in clinical use since 1916,[1] and it is used for managing moderate to moderately severe acute or chronic pain.[16] It has been found to improve quality of life for those with many types of pain.[17] Experts are divided regarding use for non-cancer-related chronic pain, as most opioids have great potential for dependence and have also been alleged to create paradoxical pain sensitivity.

Oxycodone is available as controlled-release tablet, intended to be taken every 12 hours.[18] A 2006 review found that controlled-release oxycodone is comparable to instant-release oxycodone, morphine, and hydromorphone in management of moderate to severe cancer pain, with fewer side effects than morphine. The author concluded that the controlled release form is a valid alternative to morphine and a first-line treatment for cancer pain.[19] In 2014, the European Association for Palliative Care recommended oral oxycodone as a second-line alternative to oral morphine for cancer pain.[20]

In the U.S., extended-release oxycodone is approved for use in children as young as 11 years old. The approved indication is for relief of cancer pain, trauma pain, or pain due to major surgery, in children already treated with opioids, who can tolerate at least 20 mg per day of oxycodone; this provides an alternative to Duragesic (fentanyl) the only other extended-release opioid analgesic approved for children.[21]

In the United States, oxycodone is only approved for oral use, available as tablets and oral solutions. In Spain, the Netherlands and the United Kingdom, oxycodone is also approved for intravenous (IV) and intramuscular (IM) use. When first introduced in Germany during World War I, both IV and IM administrations of oxycodone were commonly used for postoperative pain management of Central Powers soldiers.[1] 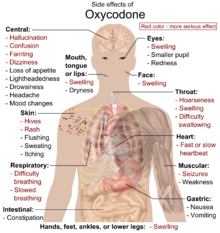 Main side effects of oxycodone[22]

Serious side effects of oxycodone include reduced sensitivity to pain (beyond the pain the drug is taken to reduce), euphoria, anxiolysis, feelings of relaxation, and respiratory depression.[23] Common side effects of oxycodone include constipation (23%), nausea (23%), vomiting (12%), somnolence (23%), dizziness (13%), itching (13%), dry mouth (6%), and sweating (5%).[23][24] Less common side effects (experienced by less than 5% of patients) include loss of appetite, nervousness, abdominal pain, diarrhea, urine retention, dyspnea, and hiccups.[25]

Oxycodone overdose has also been described to cause spinal cord infarction in high doses and ischemic damage to the brain, due to prolonged hypoxia from suppressed breathing.[26]

Oxycodone in combination with naloxone in managed-release tablets, has been formulated to both deter abuse and reduce “opioid-induced constipation”.[27]

The risk of experiencing severe withdrawal symptoms is high if a patient has become physically dependent and discontinues oxycodone abruptly. Medically, when the drug has been taken regularly over an extended period, it is withdrawn gradually rather than abruptly. People who regularly use oxycodone recreationally or at higher than prescribed doses are at even higher risk of severe withdrawal symptoms. The symptoms of oxycodone withdrawal, as with other opioids, may include “anxiety, panic attack, nausea, insomnia, muscle pain, muscle weakness, fevers, and other flu-like symptoms“.[28]

Withdrawal symptoms have also been reported in newborns whose mothers had been either injecting or orally taking oxycodone during pregnancy.[29]

As with other opioids, chronic use of oxycodone (particularly with higher doses) often causes concurrent hypogonadism or hormone imbalance.[30]

Oxycodone is metabolized by the enzymes CYP3A4 and CYP2D6, and its clearance therefore can be altered by inhibitors and inducers of these enzymes.[31] (For lists of CYP3A4 and CYP2D6 inhibitors and inducers, see here and here, respectively.) Natural genetic variation in these enzymes can also influence the clearance of oxycodone, which may be related to the wide inter-individual variability in its half-life and potency.[31]

Ritonavir or lopinavir/ritonavir greatly increase plasma concentrations of oxycodone in healthy human volunteers due to inhibition of CYP3A4 and CYP2D6.[32]Rifampicin greatly reduces plasma concentrations of oxycodone due to strong induction of CYP3A4.[33] There is also a case report of fosphenytoin, a CYP3A4 inducer, dramatically reducing the analgesic effects of oxycodone in a chronic pain patient.[34] Dosage or medication adjustments may be necessary in each case.

One thought on “Oxycodone – an addicting opioid as pain med”