Tau proteins (or τ proteins, after the Greek letter with that name) are proteins that stabilize microtubules. They are abundant in neurons of the central nervous system and are less common elsewhere, but are also expressed at very low levels in CNS astrocytes and oligodendrocytes.[5] Pathologies and dementias of the nervous system such as Alzheimer’s disease and Parkinson’s disease [6] are associated with tau proteins that have become defective and no longer stabilize microtubules properly.

The tau proteins are the product of alternative splicing from a single gene that in humans is designated MAPT(microtubule-associated protein tau) and is located on chromosome 17.[7][8]

The tau proteins were identified in 1975 as heat stable proteins essential for microtubule assembly [9][10] and since then, they have been characterized as intrinsically disordered proteins.[11] 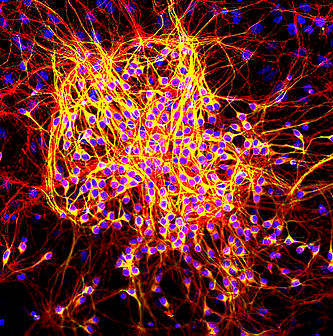 Tau protein is a highly soluble microtubule-associated protein (MAP). In humans, these proteins are found mostly in neurons compared to non-neuronal cells. One of tau’s main functions is to modulate the stability of axonal microtubules. Other nervous system MAPs may perform similar functions, as suggested by tau knockout mice that did not show abnormalities in brain development – possibly because of compensation in tau deficiency by other MAPs.[12] Tau is not present in dendrites and is active primarily in the distal portions of axons where it provides microtubule stabilization but also flexibility as needed. This contrasts with MAP6 (STOP) proteins in the proximal portions of axons, which, in essence, lock down the microtubules and MAP2 that stabilizes microtubules in dendrites.

Tau is a phosphoprotein with 79 potential Serine (Ser) and Threonine (Thr) phosphorylation sites on the longest tau isoform. Phosphorylation has been reported on approximately 30 of these sites in normal tau proteins.[13]

Phosphorylation of tau is regulated by a host of kinases, including PKN, a serine/threonine kinase. When PKN is activated, it phosphorylates tau, resulting in disruption of microtubule organization.[14]

The MAPT gene has two haplogroups, H1 and H2, in which the gene appears in inverted orientations. Haplogroup H2 is common only in Europe and in people with European ancestry. Haplogroup H1 appears to be associated with increased probability of certain dementias, such as Alzheimer’s disease. The presence of both haplogroups in Europe means that recombination between inverted haplotypes can result in the lack of one of the functioning copy of the gene, resulting in congenital defects.[18][19][20][21]

Hyperphosphorylation of the tau protein (tau inclusions, pTau) can result in the self-assembly of tangles of paired helical filaments and straight filaments, which are involved in the pathogenesis of Alzheimer’s disease, frontotemporal dementia, and other tauopathies.[22]

All of the six tau isoforms are present in an often hyperphosphorylated state in paired helical filaments from Alzheimer’s disease brain. In other neurodegenerative diseases, the deposition of aggregates enriched in certain tau isoforms has been reported. When misfolded, this otherwise very soluble protein can form extremely insoluble aggregates that contribute to a number of neurodegenerative diseases.

Recent research suggests that tau may be released extracellularly by an exosome-based mechanism in Alzheimer’s disease.[23][24]

Gender-specific tau gene expression across different regions of the human brain has recently been implicated in gender differences in the manifestations and risk for tauopathies.[25]

Some aspects of how the disease functions also suggest that it has some similarities to prion proteins.[26]

Repetitive mild traumatic brain injury (TBI) is now recognized as a central component of brain injury in contact sports, especially American football,[27][28] and the concussive force of military blasts.[29] It can lead to chronic traumatic encephalopathy (CTE) that is characterized by fibrillar tangles of hyperphosphorylated tau.[30]

High levels of tau protein in fluid bathing the brain are linked to poor recovery after head trauma.[31]

The tau hypothesis states that excessive or abnormal phosphorylation of tau results in the transformation of normal adult tau into PHF-tau (paired helical filament) and NFTs (neurofibrillary tangles). Tau protein is a highly soluble microtubule-associated protein (MAP).[10] Through its isoforms and phosphorylation tau protein interacts with tubulin to stabilize microtubule assembly. All of the six tau isoforms are present in an often hyperphosphorylated state in paired helical filaments from AD.

Mutations that alter function and isoform expression of tau lead to hyperphosphorylation. The process of tau aggregation in the absence of mutations is not known but might result from increased phosphorylation, protease action or exposure to polyanions, such as glycosaminoglycans.[6] Hyperphosphorylated tau disassembles microtubules and sequesters normal tau, MAP 1(microtubule associated protein1), MAP 2, and ubiquitin into tangles of PHFs. This insoluble structure damages cytoplasmic functions and interferes with axonal transport, which can lead to cell death.

Even though p-tau showed the strongest correlation with cognitive decline, and amyloid-beta only a slight correlation, that doesn’t mean that p-tau is committing the crime inside cells all by itself while amyloid loiters in spaces outside of cells in large gangs, creating a distraction. Mitchell’s data analysis has pointed to dynamics more enmeshed than that.

“Though the study had clear trends, it also had a good bit of variance that would indicate multiple factors influencing outcomes,” Mitchell said. And a particular manifestation of amyloid-beta has piqued the researchers’ ire.

Little pieces are water soluble, that is, not tied up in clumps of plaque. The data has shown that these tiny amyloids may be up to no good. After p-tau levels, the study revealed that those of soluble amyloid-beta had the second-strongest correlation with cognitive decline.

“Lumpy amyloid-beta, the stuff we see, ironically doesn’t correlate as well as with cognitive decline the soluble amyloid,” Mitchell said. “The amyloid you don’t see is like the sugar in your tea that dissolves and hits your taste buds versus the insoluble amyloid, which is more like the sugar that doesn’t dissolve and stays at the bottom of the cup.”

Some Alzheimer’s researchers have cited evidence indicating that free-floating amyloid helps produce the corrupted p-tau via a chain of reactions that centers around GSK3 (Glycogen synthase kinase 3), an enzyme that arms tau with phosphorous, turning it into a potential biochemical assassin.

Incidentally, Mitchell’s study also looked at un-phosphorylated tau and found its levels do not correlate with cognitive decline. “That makes sense,” Mitchell said. “Regular tau is the backbone of our neurons, so it has to be there.”

Also, p-tau is a normal part of healthy cells, but in Alzheimer’s it is wildly overproduced.

One advantage of data mining 51 existing studies versus doing one new lab experiment, is that the cumulative analysis adds the sample sizes of so many studies together for a whopping grand total. Mitchell’s analysis encompassed results from past experiments carried out on, all totaled, 528 Alzheimer’s mice.

A previous study Mitchell led had already indicated that amyloid-beta plaque levels may not be the most productive target for drug development. Separate reports by other researchers on failed human trials of drugs that fought plaque would seem to corroborate this.

Mitchell’s latest findings have corroborated the prior study’s findings on amyloid, and also added p-tau as a key suspect in cognitive decline.

To arrive at the 51 studies with data suitable for inclusion in their analysis, Mitchell’s research team sifted through hundreds of Alzheimer’s research papers, and over time, Mitchell has examined a few thousand herself. She has gained some impressions of how biomedical research may need to tackle the disease’s slippery biochemical labyrinth.

“When we see multifactorial diseases, we tend to think we’ll need multifactorial treatments,” Mitchell said. “That seems to be working well with cancer, where they combine chemotherapy with things like immunotherapy.”

Also, Alzheimer’s diagnosticians might be wise to their adopt cancer colleagues’ early detection stance, she said, as Alzheimer’s disease appears to start long before amyloid-beta plaque appears and cognitive decline sets in.

Above all, basic research should cast a broader net.

“I think p-tau is going to have to be a big part,” she said. “And it may be time to not latch onto amyloid-beta plaque so much like the field has for a few decades.”