Gastrointestinal cancer refers to malignant conditions of the gastrointestinal tract (GI tract) and accessory organs of digestion, including the esophagus, stomach, biliary system, pancreas, small intestine, large intestine, rectum and anus. The symptoms relate to the organ affected and can include obstruction (leading to difficulty swallowing or defecating), abnormal bleeding or other associated problems. The diagnosis often requires endoscopy, followed by biopsy of suspicious tissue. The treatment depends on the location of the tumor, as well as the type of cancer cell and whether it has invaded other tissues or spread elsewhere. These factors also determine the prognosis.

Overall, the GI tract and the accessory organs of digestion (pancreas, liver, gall bladder) are responsible for more cancers and more deaths from cancer than any other system in the body.[1][2] There is significant geographic variation in the rates of different gastrointestinal cancers.[1]

Age-standardised death rates from esophageal cancer, as reported by the WHO in 2004.[3]

Esophageal cancer is the sixth-most-common cancer in the world, and its incidence is increasing.[4] Some three to five males are affected for each female.[4] An “esophageal cancer belt”, in which the incidence of esophageal squamous cell carcinoma (SCC) is more than a hundred times that of adjacent areas, extends from northeastern China through central Asia to northern Iran.[1] Ethiopia also has a notably high incidence.[4] There are two main types of esophageal cancer—adenocarcinoma and squamous cell carcinoma. Worldwide, the incidence of each type is about the same, but in developed countries like North America and Europe adenocarcinoma is the more common.[4]

Cancer of the stomach, also called gastric cancer, is the fourth-most-common type of cancer and the second-highest cause of cancer death globally.[2] Eastern Asia (China, Japan, Korea, Mongolia) is a high-risk area for gastric cancer, and North America, Australia, New Zealand and western and northern Africa are areas with low risk.[5] The most common type of gastric cancer is adenocarcinoma, which causes about 750,000 deaths each year.[6] Important factors that may contribute to the development of gastric cancer include diet, smoking and alcohol consumption, genetic aspects (including a number of heritable syndromes) and infections (for example, Helicobacter pylori or Epstein-Barr virus) and pernicious anemia.[1][6] 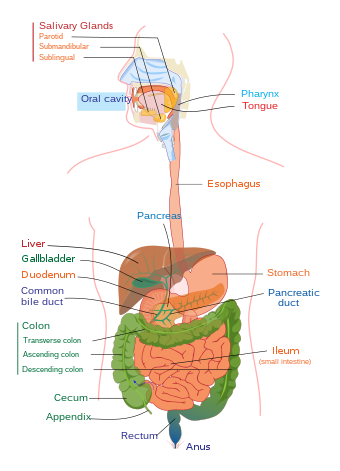 Pancreatic cancer is the fifth-most-common cause of cancer deaths in the United States,[7] and the seventh most common in Europe.[8] In 2008, globally there were 280,000 new cases of pancreatic cancer reported and 265,000 deaths.[9] These cancers are classified as endocrine or nonendocrine tumors. The most common is ductal adenocarcinoma.[1] The most significant risk factors for pancreatic cancer are advanced age (over 60) and smoking.[7] Chronic pancreatitis, diabetes or other conditions may also be involved in their development.[2] Early pancreatic cancer does not tend to result in any symptom, but when a tumor is advanced, a patient may experience severe pain in the upper abdomen, possibly radiating to the back.[7]Another symptom might be jaundice, a yellowing of the skin and eyes.[8]

Pancreatic cancer has a poor prognosis,[2] with a five-year survival rate of less than 5%. By the time the cancer is diagnosed, it is usually at an advanced, inoperable stage.[8] Only one in about fifteen to twenty patients is curative surgery attempted.[10] Pancreatic cancer tends to be aggressive, and it resists radiotherapy and chemotherapy.[9]

People get liver cancer (also called hepatocellular carcinoma, HCC or hepatoma) typically from a prolonged Hepatitis B or C infection or as a result of cirrhosis from chronic alcoholism. Liver cancer may bring about yellowing of the skin and eyes (jaundice), itching (pruritus), or cause a buildup of fluid in the abdomen (ascites). A person may feel an enlarging mass, or the cancer might be revealed by abnormal liver function tests.[11]:664–666

An attending practitioner might order a biopsy, an MRI or a CT scan, and a patient might be monitored through blood tests (including alpha-fetoprotein, liver-function tests or ultrasound. These cancers are typically treated according to their TNM stage and whether or not cirrhosis is present. Options include surgical resection, embolisation, ablation or a liver transplant.[12]:969–970

Example of an invasive colorectal cancer.

Colorectal cancer is a disease of old age: It typically originates in the secretory cells lining the gut, and risk factors include diets low in vegetable fibre and high in fat. If a younger person gets such a cancer, it is often associated with hereditary syndromes like Peutz-Jegher’s, hereditary nonpolyposis colorectal cancer or familial adenomatous polyposis.[11]:619–620 Colorectal cancer can be detected through the bleeding of a polyp, colicky bowel pain, a bowel obstruction or the biopsy of a polyp at a screeningcolonoscopy. A constant feeling of having to go to the toilet or anemia might also point to this kind of cancer.[12]:911

Use of a colonoscope can find these cancers, and a biopsy can reveal the extent of the involvement of the bowel wall. Removal of a section of the colon is necessary for treatment, with or without chemotherapy. Colorectal cancer has a comparatively good prognosis when detected early.[12]:911–912

A gastrointestinal carcinoid tumor is a rare, slow-growing form of cancer that affects certain cells in the lining of the stomach and intestines. The cells it affects make hormones that regulate the production of digestive juices and muscles that move food through the stomach and intestines. This kind of cancer usually occurs in the appendix, small intestine, or rectum. Its presence is associated with an increased risk of cancers affecting the other parts of the digestive system. It is usually treated with surgery.[15]

A ‘‘ﬁeld defect’’ or ‘‘field cancerization’’ is a region of tissue that precedes and predisposes to the development of cancer. Field defects occur in progression to gastrointestinal tract cancers.[16] These field defects may contain visible gross manifestations, epigenetic alterations and/or mutations.

Esophageal squamous-cell carcinomas may occur as second primary tumors associated with head and neck cancer, due to field cancerization (i.e. a regional reaction to long-term carcinogenic exposure).[19][20] A field defect associated with progression towards squamous cell carcinoma can be identified with epigenetic markers.[21]

Gastric cancer develops within areas (field defects) of the stomach with atrophic gastritis and intestinal metaplasia: these lesions represent the cancerization ﬁeld in which (intestinal-type) gastric cancers develop.[22] In one study, the field defect was clearly demonstrated in gastric carcinogenesis using miRNA high throughput data from normal gastric mucosa (from patients who had never had a gastric malignant neoplasm), non-tumor tissue adjacent to a gastric cancer, and gastric cancer tissue. Greater than 5-fold reductions were found in four miRNAs in tumor-adjacent tissues and gastric cancers as compared to those miRNA levels in normal gastric tissues.[23] 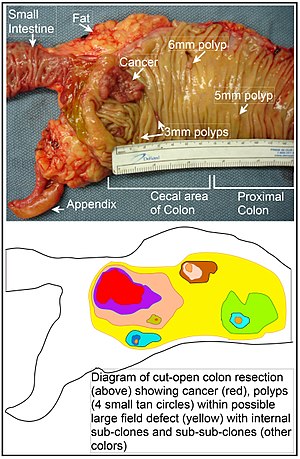 Longitudinally opened freshly resected colon segment showing a cancer and four polyps. Plus a schematic diagram indicating a likely field defect (a region of tissue that precedes and predisposes to the development of cancer) in this colon segment. The diagram indicates sub-clones and sub-sub-clones that were precursors to the tumors.

When a segment of the large intestine, containing a cancer, is removed, the area adjacent to the cancer (and removed with it) may show additional neoplasia in the form of polyps (see image). This is visual evidence of a field defect. Some of these polyps may be premalignant neoplastic tumors. As shown by Hofstad et al.,[24] when polyps are allowed to remain in the colon and are observed for three years, about 40% of polyps are seen to grow larger, likely progressing towards cancer. Luo et al.[25] summarized the substantial body of evidence that field cancerization occurs in the colon, often due to aberrant DNA methylation.

Connie’s comments: Fungus and molds in foods can be toxic to the GI. Stomach cancer is highest in China. After 3 days, moldy rice is toxic.  A female in England consumed Ramen noodle using the syrofoam container and died with stomach cancer 5 years later. Avoid trans-fat and processed foods.