Dr. Astrid Brohult, a Swedish oncologist, administered calves’ marrow to leukemia-stricken children in the 1950s, hoping it would replenish white blood cells destroyed by radiation therapy. After administering the marrow, some of the children improved immediately; many experienced increased energy and white blood cell normalization. After conducting a decade of research on the subject, she isolated a group of compounds called alkylglycerols (AKGs) in the calves’ marrow and discovered they were responsible for normalizing the white blood cell production.

Bone marrow, in broth or in other forms, is a global wellness tool. Dr. Daniel Auer, a certified clinical nutritionist, says almost every culture claims some form of bone-based concoction. The Chinese use bone to support kidney and digestive function and to build blood. The Weston A. Price Foundation reports another example from a North Carolina mountain Indian population. Their diets rely heavily on wild game, and they value marrow to nourish their growing children.

The T helper cells (Th cells) are a type of T cell that play an important role in the immune system, particularly in the adaptive immune system. They help the activity of other immune cells by releasing T cell cytokines. These cells help suppress or regulate immune responses. They are essential in B cell antibody class switching, in the activation and growth of cytotoxic T cells, and in maximizing bactericidal activity of phagocytes such as macrophages.

Mature Th cells express the surface protein CD4 and are referred to as CD4+ T cells. Such CD4+ T cells are generally treated as having a pre-defined role as helper T cells within the immune system. For example, when an antigen-presenting cell expresses an antigen on MHC class II, a CD4+ cell will aid those cells through a combination of cell to cell interactions (e.g. CD40 (protein) and CD40L) and through cytokines.

CD154, also called CD40 ligand or CD40L, is a cell surface protein that mediates T cell helper function in a contact-dependent process[1] and is a member of the TNF superfamily of molecules. It binds to CD40 on antigen-presenting cells (APC), which leads to many effects depending on the target cell type. CD154 acts as a costimulatory molecule and is particularly important on a subset of T cells called T follicular helper cells (TFH cells).[2] On TFH cells, CD154 promotes B cell maturation and function by engaging CD40 on the B cell surface and therefore facilitating cell-cell communication.[3] A defect in this gene results in an inability to undergo immunoglobulin class switching and is associated with hyper IgM syndrome.[4] Absence of CD154 also stops the formation of germinal centers and therefore prohibiting antibody affinity maturation, an important process in the adaptive immune system.

The importance of helper T cells can be seen from HIV, a virus that primarily infects CD4+ T cells. In the advanced stages of HIV infection, loss of functional CD4+ T cells leads to the symptomatic stage of infection known as the acquired immunodeficiency syndrome (AIDS).

The mechanism that killer T cells use during auto-immunity is almost identical to their response against viruses, and some viruses have been accused of causing auto-immune diseases such as Type 1 Diabetes mellitus. Cellular auto-immune disease occurs because the host antigen recognition systems fail, and the immune system believes, by mistake, that a host antigen is foreign. As a result, the CD8+ T cells treat the host cell presenting that antigen as infected, and go on to destroy all host cells (or in the case of transplant rejection, transplant organ) that express that antigen.

In the mid-1960s, studies reported “activities” in leukocyte-conditioned media that promoted lymphocyte proliferation.[19]:16 In the mid-1970s, it was discovered that T-cells could be selectively proliferated when normal human bone marrow cells were cultured in conditioned medium obtained from phytohemagglutinin-stimulated normal human lymphocytes.[18]:712 The key factor was isolated from cultured mouse cells in 1979 and from cultured human cells in 1980.[20] The gene for human IL-2 was cloned in 1982 after an intense competition.

The normal bone marrow architecture can be damaged or displaced by aplastic anemia, malignancies such as multiple myeloma, or infections such as tuberculosis, leading to a decrease in the production of blood cells and blood platelets. The bone marrow can also be affected by various forms of leukemia, which attacks its hematologic progenitor cells.[10] Furthermore, exposure to radiation or chemotherapy will kill many of the rapidly dividing cells of the bone marrow, and will therefore result in a depressed immune system. Many of the symptoms of radiation poisoning are due to damage sustained by the bone marrow cells. 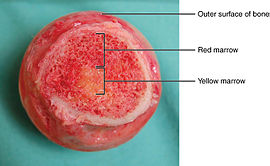 A femoral head with a cortex of bone and medulla of trabecular bone. Both red bone marrow and a central focus of yellow bone marrow are visible.

The two types of bone marrow are “red marrow” (Latin: medulla ossium rubra), which consists mainly of hematopoietic tissue, and “yellow marrow” (Latin: medulla ossium flava), which is mainly made up of fat cells. Red blood cells, platelets, and most white blood cells arise in red marrow. Both types of bone marrow contain numerous blood vessels and capillaries. At birth, all bone marrow is red. With age, more and more of it is converted to the yellow type; only around half of adult bone marrow is red. Red marrow is found mainly in the flat bones, such as the pelvis, sternum, cranium, ribs, vertebrae and scapulae, and in the cancellous (“spongy”) material at the epiphyseal ends of long bones such as the femur and humerus. Yellow marrow is found in the medullary cavity, the hollow interior of the middle portion of short bones. In cases of severe blood loss, the body can convert yellow marrow back to red marrow to increase blood cell production.

Alkylglycerols are natural etherlipids abundant in shark liver oil (SLO) in a diacylated form. SLO is known to have antitumor properties and was recently described as an inhibitor of tumor neovascularization. However, most studies did not discriminate between the respective activities of alkylglycerols and of fatty acids, which both have potent biological properties. In this work, a mouse model was used to investigate the antitumor effects of SLO and of alkylglycerols purified from the same source, both administered orally. We demonstrated that either pure alkylglycerols or SLO reduced the tumor growth in a similar manner, suggesting that alkylglycerols were involved in this effect. In alkylglycerol-treated mice, metastasis dissemination was reduced by 64 ± 8%, whereas SLO effect was 30 ± 9% below control. Purified alkylglycerols also decreased significantly plasmalogen content in tumors, whereas SLO had no such effect. Finally, we demonstrated that a 5-day treatment with alkylglycerols curtailed the presence in tumors of von Willebrand factor, a marker of endothelial cells. This result suggested an anti-angiogenic effect of alkylglycerols. In summary, alkylglycerols were shown to decrease the growth, vascularization, and dissemination of Lewis lung carcinoma tumors in mice. These findings suggest that the antitumor activity of SLO is likely mediated by the presence of alkylglycerols.

As a natural bacteria fighter, alkylglycerols are able to stimulate the helper T-cells, which are highly sensitized to the bacteria-infected macrophage, and thus the body is able to destroy the bacteria.

Determination of aluminium induced metabolic changes in mice liver: A Fourier transform infrared spectroscopy study.
In this study, we made a new approach to evaluate aluminium induced metabolic changes in liver tissue of mice using Fourier transform infrared spectroscopy analysis taking one step further in correlation with strong biochemical evidence.
This finding reveals the alterations on the major biochemical constituents, such as lipids, proteins, nucleic acids and glycogen of the liver tissues of mice. The peak area value of amide A significantly decrease from 288.278±3.121 to 189.872±2.012 between control and aluminium treated liver tissue respectively.
Amide I and amide II peak area value also decrease from 40.749±2.052 to 21.170±1.311 and 13.167±1.441 to 8.953±0.548 in aluminium treated liver tissue respectively. This result suggests an alteration in the protein profile.

The absence of olefinicCH stretching band and CO stretching of triglycerides in aluminium treated liver suggests an altered lipid levels due to aluminium exposure. Significant shift in the peak position of glycogen may be the interruption of aluminium in the calcium metabolism and the reduced level of calcium.
The overall findings exhibit that the liver metabolic program is altered through increasing the structural modification in proteins, triglycerides and quantitative alteration in proteins, lipids, and glycogen. All the above mentioned modifications were protected in desferrioxamine treated mice.
Histopathological results also revealed impairment of aluminium induced alterations in liver tissue. The results of the FTIR study were found to be in agreement with biochemical studies and which demonstrate FTIR can be used successfully to indicate the molecular level changes.

About desferrioxamine, a chelating agent to get rid of excess iron or other metals in the bodyDesferal injections contain the active ingredient desferrixoamine mesilate, which is a type of medicine called a chelating agent.
Desferrioxamine is a medicine that binds to excess iron in the body. It is then excreted in the urine and faeces, thereby reducing iron levels in the body.
Iron is an essential part of haemoglobin, the oxygen-carrying pigment found in red blood cells. In normal situations, iron balance is tightly controlled. Most average diets supply adequate amounts of iron and any amounts excess to requirements are excreted. In certain circumstances, the normal control mechanisms are overwhelmed, leading to an accumulation of iron in the body (iron overload). Iron builds up in the cells of the kidneys, heart, liver, brain and other organs, and can cause congestive heart failure, cirrhosis of the liver and diabetes if left untreated.
Iron overload occurs most commonly as a result of repeated blood transfusions. These might be necessary to treat bone marrow failure (eg caused by radiation, chemotherapy, viruses or hereditary reasons) or blood disorders like thalassaemia or anaemias. Or it may be as a result of iron storage disease, eg haemochromatosis. In this condition, excessive amounts of iron are absorbed from the gut and deposited in the tissues.
Iron overload can also occur as the result of iron overdosage (iron poisoning).
Desferrioxamine is given to bind to and remove excess iron in all these situations.

Connie’s comments: Alzheimer’s and Parkinson’s diseases are believed to be be caused by metal toxins such as aluminum. Use stainless steel cooking pots and pans.

Call for part time or full time business or job 408-854-1883 in financial planning, college planning, retirement planning and helping others with their idle money to work for them at 13%, tax free, safe and secured with free health benefits

The protein encoded by this gene is a member of the superfamily of ATP-binding cassette (ABC) transporters. ABC proteins transport various molecules across extra- and intra-cellular membranes. ABC genes are divided into seven distinct subfamilies (ABC1, MDR/TAP, MRP, ALD, OABP, GCN20, White).
This protein is a member of the ABC1 subfamily. Members of the ABC1 subfamily comprise the only major ABC subfamily found exclusively in multicellular eukaryotes. This full transporter has been detected predominantly in myelo-lymphatic tissues with the highest expression in peripheral leukocytes, thymus, spleen, and bone marrow. The function of this protein is not yet known; however, the expression pattern suggests a role in lipid homeostasis in cells of the immune system. [provided by RefSeq, Jul 2008]

Connie’s comments: Our lymphatic system cleans our body from waste products/toxins. Our body needs to balance fat metabolism and absorption. There is an increased chance of finding more cancer/abnormal cells in our fat tissues. We have to protect our bodies from toxins by consuming only whole foods, living a lifestyle with less stress and avoidance of toxins or exitotoxicities.