Contact Connie at 408-854-1883 for more info. We can also provide this free holistic senior care seminar in your community or organization. Email motherhealth@gmail.com

What: Learn how to use holistic senior home care in giving comfort to those with chronic health issues, terminally ill and home alone from Connie Dello Buono.  Learn pain and arthritis management from Quli Zhou, L.Ac. MS

I am sharing my childbirth and women’s health ebook to all.

When Birthing Ways Healing Ways came out at amazon , ebooksonthe.net sold my ebook to Amazon and so I did not get a penny. I was new to publishing and I love writing about my childbirth experience with Nurse Midwives in the bay area so I write for it is my passion.

So now, I am giving away my ebook in the hopes of getting referrals to my bay area senior caregiving , health coaching and health talks and soon an ecommerce site for http://www.clubalthea.com

The link below contains my ebook, email me at motherhealth@gmail.com for your feedback.

Once I massaged a pregnant woman while I provide childbirth tips to her. She followed my advice of walking one mile a day and other tips. Two weeks later she had her baby and only spent two hours in labor at the hospital. All natural birth happened so bonding with mother and baby went well.

During the three years that I was a full time mother to care for my two toddlers, I read medical, nursing and midwifery books which led me to my contract job as pharmacy technician instructor in the bay area which lasted for a year and  then I went back to the corporate world.

When pregnant, walk a mile a day for easy labor. When the baby is born, massage baby with calendula oil before each bath.

Happy birthing so they say. I also pray to parents who lost their babies via environmental toxins, miscarriage, forces of nature but seldom through childbirth in this century. May God and their community give them lots of love.

ABC’s of Respite: What is Respite Care?

Quality supplements are at:

Nestled in the rolling hills of the Pilanesberg, one of South Africa’s most scenic locations, the Sun City Resort is a world unto itself and has earned a reputation as one of Africa’s premier destinations.

Whatever you want, you’ll find it at Sun City. Experience everything from the sizzling entertainment and restaurants, which cater all tastes, to their more relaxed poolside venues, golf courses, lush gardens, and extensive sporting facilities.

The Sun City Resort is bordered by the Pilanesberg National park, a 55,000-hecture malaria-free game reserve. The park has a wide variety of African wildlife including lion, rhino, elephant, buffalo, leopard, wild dog, cheetah, and hippo.  A variety of safari activities are offered in the park daily.

Still need a pair of solar eclipse glasses? Here’s where to find them. (Maybe.)

We will update this post periodically as we hear of new vendors (or sold-out vendors).

We all know by now that you need to wear special glasses to watch the eclipse. Not only is it harmful to your eyes to stare at the sun, but you really won’t be able to see anything if you don’t have the glasses to filter out most of the sunlight.

Over the past week, glasses have been flying off the shelves everywhere. I spoke with an employee of my local Ace Hardware Thursday afternoon in Arlington, Va., and he told me they had received some more Wednesday and sold the entire shipment in one hour. Geez!

Needless to say, by the time you read this things may have already changed. I recommend looking through our best suggestions and seeing which options are feasible for you. But before you go to any store or vendor, call them to make sure the glasses are still in stock.

And be nice; these people are fielding literally hundreds of calls per day about the glasses.

NASA is giving away free glasses at its events. Use this map to find an event near you.

Warby Parker, the super-hip eyeglasses store, announced earlier this month that it is giving away free glasses, but it is already out of stock in some big cities, including Washington. You can see if there’s a Warby Parker store near you here, but make sure to call the store before you make the trip.

The convenience store is selling approved glasses nationwide, although it’s likely that some of the stores have run out. Fortunately — at least in the big cities — you can’t throw a stone without hitting a 7-Eleven, so you’ll have plenty of backups.

Some locally owned hardware stores have been selling the glasses and may still have some in stock. Call in advance, though!

Some libraries that are part of the STAR-Net program will have a limited number of eclipse glasses. As far as I can tell, it’s up to these libraries to decide how they want to give them away. Some of the libraries have chosen to host eclipse events on Aug. 21, and if you attend you will be given a pair of viewing glasses. Others are giving them away in advance.

To find a library near you that’s giving away glasses, use this map, then visit the website of the library to see how its is handling its giveaway. You may also want to call if you can’t find enough information on the website.

Use your social network to see whether anyone has extra glasses. Post a request on Facebook and your local email lists and forums. Ask your co-workers. You never know!

If you’re buying for a large group

You can purchase a large quantity from American Paper Optics, but you must buy in bulk. At this point, they are only offering FedEx overnight shipping, which will also run you a pretty penny.

Other retail chains to check

I have no doubt in my mind that there will be people selling eclipse glasses outside on the day of the big event. Make sure the glasses are dark enough:

“You shouldn’t be able to see anything through a safe solar filter except the Sun itself or something comparably bright, such as the Sun reflected in a mirror, a sunglint off shiny metal, the hot filament of an unfrosted incandescent lightbulb, a bright halogen lightbulb, a bright-white LED flashlight (including the one on your smartphone), or an arc-welder’s torch. All such sources should appear quite dim through a solar viewer.”

Play Video 1:24
Fake glasses sell ahead of eclipse
Counterfeit glasses have flooded the market ahead of the first coast-to-coast solar eclipse in a century. (Reuters)

Smithsonian National Air and Space Museum (Downtown)
Steven F. Udvar-Hazy Center (Chantilly, Va.)
Each of these locations is giving away a limited number per day. Both locations open at 10 a.m. When you arrive, head straight to the visitor center to see if they still have some for the day. They are only giving out two pairs per group.

I’ve received a few tips that there are two guys at a booth near the food at Montgomery County Fair selling eclipse glasses. (If you are these guys, shoot me an email!)

They aren’t glasses, but they’re just as good. These solar viewers are available in the vending machine at Maketto on H Street. 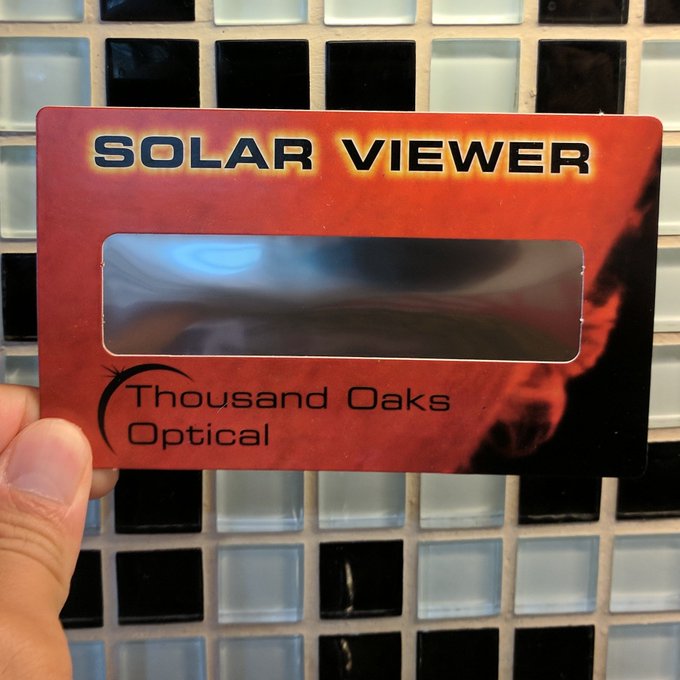 The Prince George’s libraries are hosting eclipse-viewing events. You need to attend one of the events to get the glasses. Given the limited quantity, young children will be prioritized. Locations: Upper Marlboro, Beltsville, Hillcrest Heights, Largo-Kettering, Laurel, Bowie, Glenarden, Hyattsville and Oxon Hill.

A limited number of glasses will be provided for attendees during the library’s viewing party.

The Walmart on Georgia Avenue NW is out of stock, but I have received emails from readers saying they found some at the suburban Walmarts.

The zoo will be giving away glasses at its eclipse event on Monday.